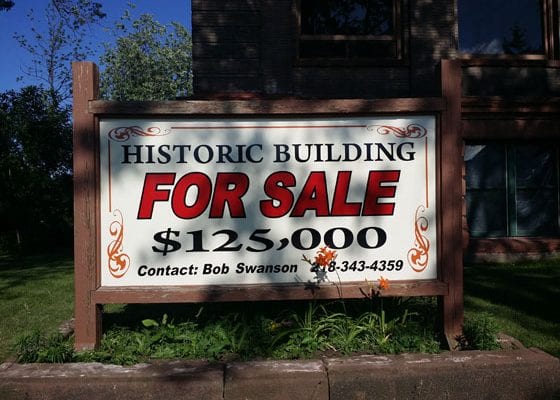 Inside the Carnegie Library

Here is an image you have likely seen before. You have probably driven by it on your way to the Blatnik Bridge or Red Mug. Have you ever been inside, though? It is not publicly open, but I was given the chance to go inside and take a few pictures.

The library is one of about 2,500 Carnegie Libraries across the United States. This particular one was the first to be built in Wisconsin.

This is the first scene you see upon entering the library, which was opened in February 1905.

Andrew Carnegie was a Scottish-American entrepreneur famous for his steel empire, authoring the book The Gospel of Wealth, and his philanthropy.

The bookshelves stand empty, as they have been since the Superior Public Library was relocated to the corner of Tower Avenue and Belknap Street in 1991.

Over the years the building has received some repairs to keep it safe and functional, but whomever purchases it will have to remodel it entirely. The buildings main shareholder, Bob Swanson, estimates renovation of the building would cost upwards of one million dollars. Asbestos abatement was done by a previous developer, but there are many repairs, reconstruction, and improvements needed to bring the building to code.

Photographed here is the meeting room, located on the north side of the first floor. At this table the board members hold their meetings. During this reporter’s visit, they joked that the only item on their agenda was “to sell the building.”

The building was put up for sale after the town library moved. It passed through several owners over the years. About six years ago, the previous city administration had its eyes on tearing it down, as it had with the Palace Theater in 2006. A group of concerned citizens pooled their money together to save the building.

One staircase used to go down to the lower level, but is now affectionately called “the staircase to nowhere” by the library board. They see this space as a good thing. The lower level has high ceilings, and thanks to its sturdy beams and well spaced pillars, would lend itself to an open architecture format that has become very popular in recent years.

Most of the Superior’s Carnegie Library today is large empty rooms with deep rooted history and a world of potential. A very large safe remains on the main level, but there are no treasures to be found inside.

It is for sale for $125,000 currently. Offers have come up for potential buyers. Notably last year one person wanted to buy it and turn it into a natural history museum. His goal was to raise the money required through a crowd funding site but was ultimately unsuccessful in that endeavor.

Over the years, the City of Superior has shown an interest in the building, but funds are short when it comes to redevelopment.The building is not currently on the historic register, but is eligible should a developer choose to go that route. That may pave the way for certain incentives and/or historical tax credits.

Nonetheless, some developers hesitate to seek historic recognition due to the restrictions placed on future renovations. City representatives have indicated they are prepared to work cooperatively with potential developers. While there are no public funds available to help with redevelopment, there may be some opportunities for in-kind services.

The original hardwood banisters are still present, reminding us of a more elegant past than is currently exhibited by the overall disrepair of the building.

Classic Ionic Romanesque columns decorate both the exterior and interior. To say the least, they don’t build them like this anymore.

One thought on “Inside the Carnegie Library”

Go Along for a Ride in a Model T