Home Lifestyle Arts & Entertainment A Musical Delight at The Underground 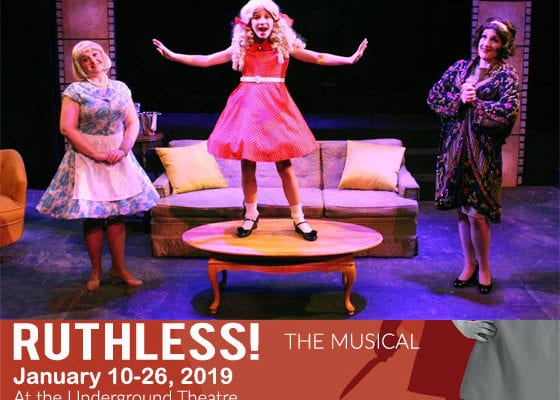 A Musical Delight at The Underground

While searching for something to do at the last minute this past Friday evening, my wife learned of a play being presented that night at the Underground Theatre in the Duluth Playhouse by the name of “Ruthless.” It had opened the night before on a three week run so we agreed to check it out.

What a delightful experience it turned out to be! Due to misreading the show time, we arrived an hour prior to the performance and after navigating the icy sidewalks found our way to the aptly named Underground Theatre. Fortunately, the theatre has a bar offering a nice selection of beers, wines and spirits. What better way to pass our time while waiting for show time than with cocktails in hand viewing the interior of the Lake Superior Railroad Museum?

Our early arrival afforded us front row seating since the theatre operates on a first come, first served basis. We learned that of the 112 seats available, all but eight had been pre-sold, making us happy to have arrived early. 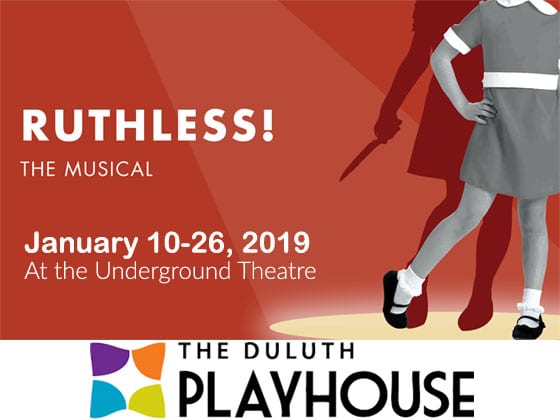 The show opens with musical director Isabella Wurm and Linda Bray seated behind the stage playing eerie music to set the mood for the show. Director Robert Hadaway’s notes describe the play as a campy take on melodramatic films such as All About Eve and Mame. In Ruthless, the cast satirizes overacting and musicals to the delight of an appreciative audience.

In keeping with the musical theatre motif of the show, each cast member has numerous opportunities to demonstrate their vocal skills, and young Sofia Salmela successfully exercised her tap dancing skills on more than one occasion. All in all, the show was punctuated by snappy repartee and spirited song and dance.

Young Tina will do anything to play the lead role in her school play, and we mean anything! The show is funny, fast paced and is a self-described “wickedly twisted musical comedy.” We agree and give the show four thumbs up!

Without tipping the story, we can share that young Tina, the ingenue beloved by her mother Judy, is the highlight of the show, and Miss Salmela is not only a talented actress but an accomplished songstress with a ton of magnetism. We expect to see more of her in the future.

As Judy Denmark, Tina’s mother, Jennie Ross was very entertaining and quite funny. Pert, cute and ditsy come to mind. Ms. Ross plays a dual role that we’ll allow you to learn about first hand. Suffice it to say the actress demonstrates a different persona so well that you may forget her previous portrayal.

Emily Lanik Parr as the talent agent turned in a first class rendition of the snooty yet artsy high brow kind of character we all love to hate. A larger than life character, she truly brought to mind the domineering stage mothers we’ve all heard about. Her role appears to be heavily influenced by Rosalind Russell’s role in the 1958 film Auntie Mame.

When Sara Marie Sorenson first appeared on stage in her role as the mean-spirited drama critic who just happens to be Tina’s grandmother, her entrance was larger than life. I found her performance a bit reminiscent of that of Conchata Ferrel who played the role of cantankerous housekeeper Berta to  Charlie Harper on Two and Half Men. Dripping with condescension and sarcasm, Ms. Sorenson’s performance was first-rate.

The shows runs through Thursdays through Saturdays, until January 26th, with 7:30 pm showtimes. Tickets are $20 and are available on line by clicking HERE.

Please Note: This show contains strong adult language coming from a tiny mouth, and mild adult content. Yes, there is a cutesy Shirley Temple-type little girl on our poster but is not an appropriate show for children.

The Cast of “Ruthless” 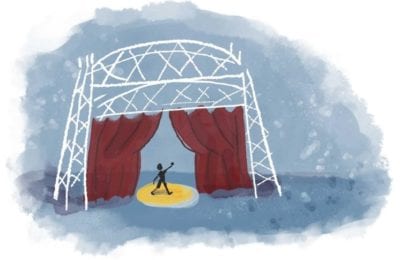 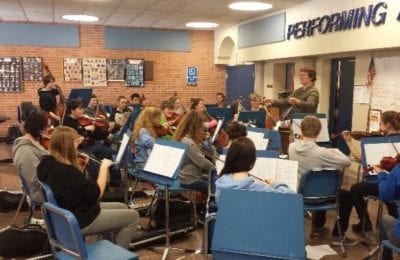 Around the Circle With Lake Superior Magazine

Week of September 21, 2018 Cruises for Two Lifetimes?: The Lake Superior Marine Museum Association has been lucky to receive the...