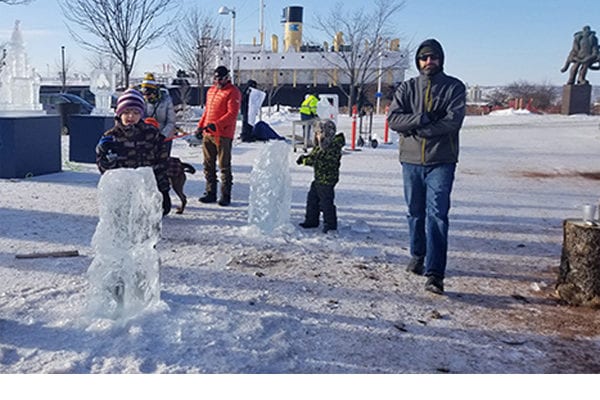 If one thing is clear about the winter season in our area, it’s that it can sometimes overstay its welcome. That is why the City of Superior decided three years ago that it was time to organize an event that would be inclusive and family-friendly during the dog days of winter.

After many meetings held and calls made, the Lake Superior Ice Festival partnered with several local businesses and organizations to make its debut in January of 2017 at Barker’s Island. Featuring attractions such as the Great Lakes Pond Hockey Classic, a snow slide more than 70 feet long, bonfires and s’mores, plus a fireworks show, the first festival started off with a bang.

“The festival showcases what people already know: that winter is awesome and we should be celebrating it,” said Nikky Farmakes, director of marketing and social media for the Superior-Douglas County Area Chamber of Commerce. “It shows how resilient the Superior people are and how much we want to make Superior a great place to live, work and play every day.”

After a successful first year, festival organizers have worked hard to find ways to bring in more partners and make it bigger and better each year. “Every year we are trying to add something new,” Farmakes said, mentioning an improved Kid’s Zone in 2019 that included craft activities, a scavenger hunt, photo booth, interactive exhibits and visiting with Sterling Silver Ice Princesses and other characters. Ice racing is also a crowd pleaser, featuring stock car racing through the Lake Superior Ice Racing Association and motorcycle and ATV racing through the Midwest Ice Racing Association.

The third annual ice festival this year brought even more to the table, including an igloo building contest sponsored by the Superior Sunrise Centennial Rotary Club, a portable sauna known as a “Hiki Hut” outside of the Lake Superior Estuarium and the Big Pond Bonspiel organized by the Superior Curling Club. The Ice Sculpture Clue Contest was also a 2019 addition; festival attendants could visit each business hosting an ice sculpture for a chance to win $500 in “BID Bucks” that can be used to buy goods or services at participating Superior Business Improvement District businesses.

Putting on an event this size requires months of preparation and many community partners, according to Farmakes. “We get started planning as soon as August,” Farmakes said, “and if it wasn’t for… (read more)

Superior Days 2019 update From February 11th through February 13th, a contingent of 140 delegates from Superior and the counties...

Zenith City News February 5, 1802: Penobscot Chief Orono dies at the age of 108. During his lifetime, he converted...