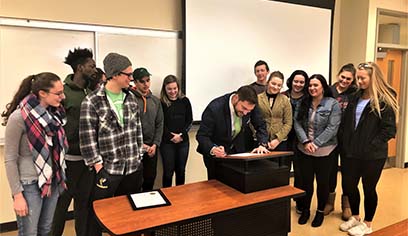 Students in Nathan LaCoursiere’s class at UW-Superior helped make his appointment official by executing the oath of office.

University of Wisconsin-Superior senior lecturer, Nathan LaCoursiere, has been appointed by Minnesota Governor Walz and Lt. Gov. Flanagan to serve as a statewide, at-large member on the Commission on Judicial Selection. In this role, LaCoursiere will review and vet candidates for appellate judicial vacancies and forward recommendations to the Governor.

“I am honored to have the opportunity to assist Gov. Walz, Lt. Gov. Flanagan, and Commission Chair Velazquez-Aguilu with their efforts to continue building a fair, inclusive and independent judiciary that is representative of – and responsive to – all citizens in Minnesota,” said LaCoursiere.

LaCoursiere joined the Legal Studies and Criminal Justice Program at UWS in 2018 after practicing for seven years as an Assistant City Attorney for the City of Duluth and before that, as an associate attorney with the Duluth law firm of Hanft Fride, P.A.

He is a recipient of Duluth’s 20 Under 40 Award and Minnesota Lawyer’s 2014 Up and Coming Attorney Award for his role in prosecuting and ending the sale of synthetic drugs at the former downtown Duluth head shop known as the Last Place on Earth.

Students in LaCoursiere’s Constitutional I class helped make his appointment official by executing the oath of office to be returned to the Secretary of State.

“This served as a wonderful opportunity to discuss the importance of service, engagement in our shared legal community, and the importance of working to build a fair, inclusive and independent judiciary that is representative of all citizens,” said LaCoursiere. “I am excited to continue sharing perspectives gained from this experience with my students.”

LaCoursiere is one of 26 appointees that include six at-large members and 20 district members, two from each of the ten judicial districts. The Governor and Lieutenant Governor previously announced Lola Velazquez-Aguilu as the Chair of the Commission, and all 49 members will serve terms that expire on January 2, 2023.

John B. Herrington to Appear at UWS