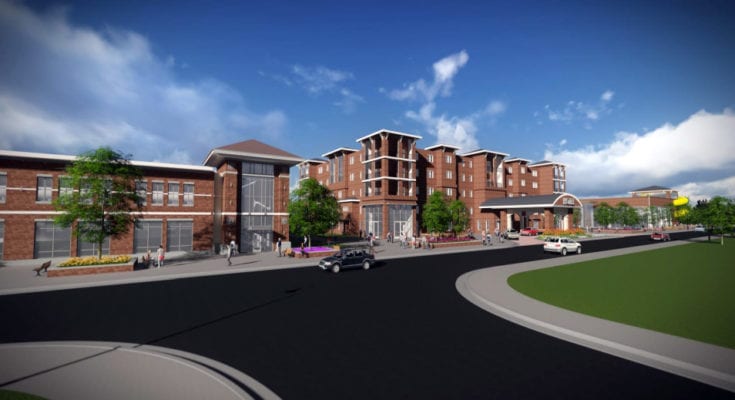 At a recent public presentation by the Better City Superior group, Bruce Thompson of National Bank of Commerce led a panel discussion about the future of Superior. A life-long Superior resident, Thompson is concerned that our City is mired in symbolic quick sand that not only prevents it from progressing, but even causes Superior to regress in some ways. He is asking local residents to complete a survey about their views regarding how to grow Superior. Please click the link on the right to participate in the Better City Superior survey (the survey will be taken down on Friday, December 18th, so don’t delay in taking it.)

Thompson shared with those in attendance at the December 3rd meeting that, “in my lifetime and actually…since World War II, Superior has not grown…we continue to lose population annually.” His mission, and that of the group of concerned citizens that make up Better City Superior is to turn around this continued downward trend.

More than 40 local businesses have come together to help finance an ongoing project with the goal of finding a way forward for our fair city. The project, two years in the making, is focused on bringing a $100-$125 million project to downtown Superior that is slated to house a 150 room hotel & convention center, a field house to attract indoor soccer players from around the tri-state area, and even an indoor water park. There is also talk of a new movie theater to replace the one recently closed in the Mariner Mall.

The folks behind Better City Superior are asking as many local residents as possible to respond to an online questionnaire so that they are better able to measure the local support for such a project. This is where they need your opinion…please follow THIS LINK and answer their questions.

As Thompson sees it, raising money for the development is not the challenge as is setting up a program that will provide private equity investors an appropriate return on investment. Unless the return is sufficient to warrant the risk, investors will avoid Superior. He proposes a Public Private Partnership, or PPP.

The way this is done is by providing incentives to private developers in the form of tax breaks and partial funding so that their return on investment meets market standards. The up-front expense to the public is then paid back over time through fees, added sales taxes, and expanded tax base.

Thompson went on to say that this is a value added proposition…that by improving the downtown district of Superior in such a manner that it attracts more visitors, and puts more money into the cash registers of downtown businesses, we can enhance the ability of private business to increase sales and profits, which will then trickle down to the city via sales tax, fees, and property taxes paid on fully occupied buildings.

The solution as proposed by Better City Superior is to create a ten to twelve acre “exposition district” in the downtown that will permit imposition of a .005% sales tax on food & beverage sales throughout Douglas County (equivalent to 5¢ on a $10 purchase), user fees for the amenities included in the complex, and bonding for approximately 30% of the project through tax increment financing. It should be noted that several government units, including the City and the County, as well as private businesses, and organizations such as the Superior Amateur Hockey Association, and the Superior Young Professionals have given their blessing to this plan.

The Tavern League, which represents many of the businesses who will be asked to collect the additional half percent sales tax, is currently discussing the proposal with their members to determine whether they will back the initiative.

The Better City Superior proposal is modeled after a similar district created in Milwaukee, which was originally motivated by the need for a new area for the Milwaukee Bucks, but has since been expanded.

The video above gives some background on this development, what it means to Milwaukee, and how Governor Scott Walker managed to get a deal done to keep the Milwaukee Bucks in Wisconsin.

The City of Milwaukee created a Local Exposition District called the “Wisconsin Center Tax District” for the purpose of acquiring and managing exposition center facilities. To fund these facilities, the District imposes the following taxes:

Special legislation was passed by the Wisconsin Assembly to permit Milwaukee to create the Expo District and to allow the District to issue up to $203 million in bonds to assist in the construction of a sports and entertainment arena and sports and entertainment arena facilities in downtown Milwaukee. Better City Superior plans to lobby the Assembly for similar powers in order to begin redevelopment of downtown Superior.

Thompson believes that along with anticipated increased food and beverage sales tax receipts, along with additional lodging taxes, due to expanded business in the downtown area, and long-term additional real estate taxes (that’s the value added part of the equation), that a Superior Exposition District will be sufficient to justify bonding the project.

By backing the project at a rate of approximately 30%, Better City Superior supporters believe they can make their plans sufficiently attractive to private investors to make their dreams a reality.

Mayor Bruce Hagen was not in attendance at the meeting, but supports this project according to Thompson and Chamber President Dave Minor. In fact, Mayor Hagen is at the top of the list of team members on the Better City Superior website.

Minor summed things up by stating that the goal is to bring this proposal to Madison with the message that the community of Superior is asking for this.

There is no doubt this will be a major objective of this year’s Superior Days delegation when they travel to Madison in February of 2016. State Senator Tom Tiffany of the 12th District has already expressed support of the Better City Superior proposal as he believes there is a great need for new development in northern Wisconsin. He represents the northeastern section of the state, and hopes that by assisting Superior in getting an Exposition District, he can encourage more growth in the northern sections of the state. 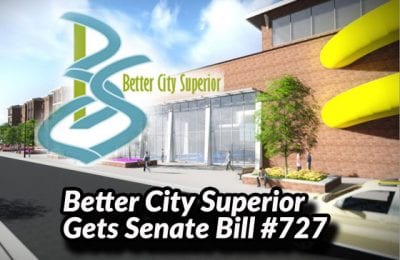 One thought on “Better City Superior Wants Your Opinion”