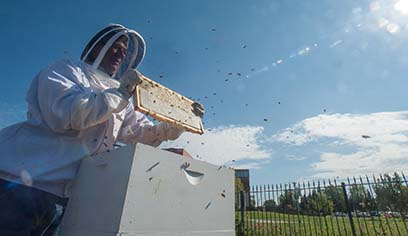 When professor Ed Burkett (Doc Bee, as he is known by his students) lost all of the hives in the UW-Superior bee apiary during the winter of 2016, he came up with an idea to build a device to solve the problem. Today, it has a patent pending and is being assessed by a student team for business plan development.

One of the greatest challenges faced by beekeepers, particularly in polar climates, is the seasonal loss of beehives. On average, beekeepers in the United States lose about 30 percent of their hives during the winter months, with areas in the Upper Midwest losing as much as 50 percent. These losses translate into significant ecological and financial costs. Edward Burkett, University of Wisconsin-Superior biology professor, experienced this issue acutely in 2016 when all the hives in the UW-Superior bee apiary were lost during the winter months. He had just established the apiary on campus that year as part of the university’s Urban Honey Bee Project — an education, research and community service initiative designed to engage undergraduate students in research with honey bees.

Doc Bee (as he is known by his students) came up with an idea to build a Beehive Wind Shield™, a device he believed would help solve the problem, and mentioned it one day to his friend and colleague, Kenn Raihala, a retired mechanical engineer at UWS.

“I told Kenn about my idea and he said, ‘I can build that.’ I originally thought he’d just build a few devices and I’d put them on my own hives and those in the UWS apiary, and that would be it,” said Burkett. “But, Kenn is an inventor, so he did a patent search and couldn’t find anything close to what we had created.”

The Beehive Wind Shield™ is an innovative solution to a complex problem that arises in cold climates. Bees beat their wings inside the hive to keep it about 88 degrees, the temperature needed to survive. However, the heat and water vapor created by the bees causes condensation to form on the top of the hive in cold temperatures, which drips down on the bees and kills them.

“So, beekeepers have a dilemma,” said Burkett. “They need the ventilation to keep the condensation down, but the air can also chill the bees and kill them. The Beehive Wind Shield™ is designed to protect the hive from wind

Dr. John “Little Bird” Anderson SUPERIOR, Wis. – To celebrate the 125th anniversary of the founding of the University of...

Gone To The Dogs

For the past few months, Sandy Thompson, sous chef at Chartwells, has been turning leftover food into healthy dog treats....