Nonetheless, the recently elected councilor offered a sincere and informed presentation, and shared a desire that he and his fellow city councilors can find a compromise solution on Tuesday night that will best serve the City. His proposal is to enact at $7.75 per month fee on all households and small businesses beginning January 1, 2016, a $8.75 per month fee as of January 1, 2017, and then a $9.75 fee beginning January 2018. He also proposes a lower fee of $6.75 for those who are financially challenged, or who simply want to use a smaller garbage container.

Garfield believes that with his proposal, the City will move approximately 10% of the households and small businesses to smaller cans by 2018. He claimed to have run the numbers and found that his proposal will create a surplus of about $138,000 by 2018, and $828.000 by 2019. When asked how people would be qualified for the smaller 32 gallon cans, he said he would leave that decision up the Public Works Department.

It is worth noting here that Mayor Hagen has stated that any form of reduced rate qualifying would most likely require the services of one or two full time employees to collect and verify applications. The City would also need to purchase new 32 gallon cans at a cost of $50 each, and all City refuse trucks would need to be retro-fitted to be able to handle the smaller cans. According to Public Works Director, Todd Janigo, the currently mechanisms could pickup the cans, but they would then fall into the trucks and need to be retrieved by the drivers after each dump. No estimate of the cost of retro-fitting the trucks was available when this article went to press.

According to Garfield’s calculations, his proposal will amount to approximately 61% of what the City proposed last week with its across the board $9.75 rate beginning on January 1, 2016. The City’s plan would result in a projected surplus at the end of 2019 of $1,347,699, so using Garfield’s numbers, his plan would reduce that surplus to $822,096. He believes that this amount of reserve is satisfactory to account for unanticipated costs, and routine replacement of aging equipment.

He acknowledged that the City could accept a proposal to sell the landfill and end city-owned municipal garbage collections, but said that if it came down to that being his only option other than accepting the Mayor’s proposed fee of $9.75 per month, he would have to side with the Mayor in order to preserve City jobs at the landfill. However, Garfield then pointed out, that the Mayor’s proposal lacked sufficient support to pass last week. The proposed $9.75 ordinance failed by a vote of 6-4.

There was another proposal, brought last week by Councilor Dan Olson, to adopt a $7.75 monthly fee. Garfield said he does not support that proposal because it lacked support and was financially unsound.

Garfield is not in favor of doing nothing since the City would face a $3.3M deficit at the end of 2019, which would force the City to draw down its reserve, or borrow. He believes this option is volatile over the long-term, and would adversely impact the City’s Standard & Poor credit rating, as well as the long-term budget.

He concluded his talk by saying that he hopes his proposal can help the Council come to a compromise, and that it will help stabilize the City budget. He also pointed to his reduced fee option, and the preservation of city jobs as additional benefits.

Given the light turnout at this evening’s public forum, one wonders if this might indicate the general public isn’t as concerned about this issue as some on the City Council seem to think. We will be interested to see the turnout at tomorrow night’s City Council session.

For other articles about Superior’s Trash Woes, follow these links: 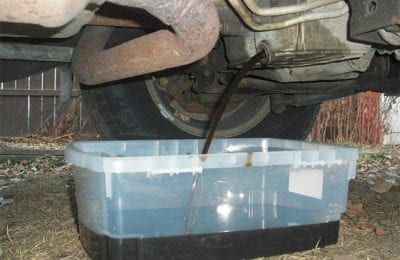 Sorting Through the Landfill Dilemma

Digging Into the Numbers Burying the Landfill By Doug Dalager Mayor Bruce Hagen has called a special session of the...

Garfield Reintroduces Stepped Garbage Fee By Doug Dalager In an effort to reach agreement over the controversial garbage ordinance rejected...