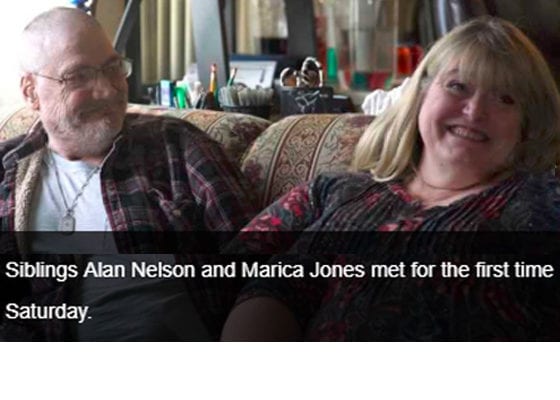 A Superior man discovered he had five other siblings recently through Ancestry.com and this weekend he was able to meet one of them for the first time.

And the meeting was just in time for Alan’s birthday which was on March 27. He got the birthday gift of a lifetime meeting his sister on Saturday.

Marcia drove all the way from Chicago, Illinois, to meet Alan. The excitement and emotions were through the roof that day.

“I’m overjoyed! This is the best birthday I ever had,” Nelson said.

And the way they found out about one another was through some hard digging online on Ancestry.com

Five of the six siblings were given up for adoption by their biological mother.

“It was all through DNA and internet and modern technology. Otherwise, we wouldn’t have ever known that any of us existed so it’s quite a thrill!” Jones said.

It took over 60 years of Alan’s life to discover he had other siblings. They all live in different states like Denver, Las Vegas, and even in Australia.

Marcia said she knew immediately that the person was her sister and connected with her. From there, she flew out to Denver to meet her sister, Trina Mahan. A year after, they learned about their brother, Daniel Wieland, on Ancestry.

And recently, they all learned about Alan. Daniel connected with him on the website.

Alan said he’s grateful for what he gained in using Ancestry. He learned about the website in a Dr. Phil episode and said if it worked for Dr. Phil, it would work for him.

“It’s the best investment ever and now you gotta put up with two older brothers,” Nelson said to Jones. And she responded by saying…(read more)

This promotional pamphlet is from roughly 1980. Within the text might be clues that narrow down a specific year. The...