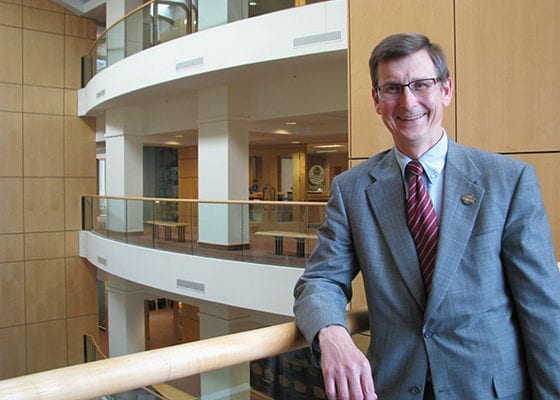 From the time he was 10 years old, Andy Lisak had his sights set on going to the United States Naval Academy. Things didn’t quite work as planned, but after a career devoted to the betterment of Wisconsin communities, including those in the Superior and Douglas County area, he’s not complaining.

Given the circumstances, that says a lot about the recently retired Douglas County administrator, who championed efficient, effective county government, as well as wise use of taxpayer dollars.

A little more than a year ago, Lisak publicly announced his diagnosis of Stage-4 Squamous Cell cancer, noting that it was an aggressive form and he was facing a lot of unknowns. Within a week, he was told the cancer had spread to his lungs. Now, after a year of chemotherapy treatment, he remains at Stage-4C. Yet Lisak remains positive and hopeful.

“I’ll probably get this wrong,” he said when citing statistics. “It’s something like 80 percent of those diagnosed with this die in the first four years, and only 8 percent have long-term survival beyond five years. I’m going to be in that smaller percent. I feel it,” he said.

After his diagnosis, Lisak continued to work in a limited capacity, helping County Board Chairman Mark Liebaert, board members, managers and employees of the various Douglas County departments with administrative transition. On January 24 of this year, Lisak formally stepped down from his position with Douglas County.

“I didn’t think I had the financial ability to go to college. I’d planned on going to the Naval Academy.”
– Andy Lisak

Lisak was born and raised in Superior’s North End neighborhood. He fondly remembers his grandparents’ homestead on Connor’s Point and the many hours his whole family spent there, tending their large garden and caring for chickens. He attended classes in the Catholic school system through junior high and graduated from Superior Senior High School in 1980. It was there he found his first of many mentors.

“I didn’t think I had the financial ability to go to college.
I’d planned on going to the Naval Academy and I had a principal nomination. Bill Rhenstrand asked me what I would do if I didn’t get accepted. I told him I’d probably go to work for the railroad like… (read more)

TAGAndy Lisak
Previous PostSweet Pickin’s, Choosing Cherries in an Apple World Next PostCircular Connections, An Exhibition of the Amazing Artistry of Christi Belcourt

This post was originally published on Positively Superior To Preserve and Honor New Programs and Events Spark Increased Visits to the Richard...

Cyclists Gear Up for Another Year