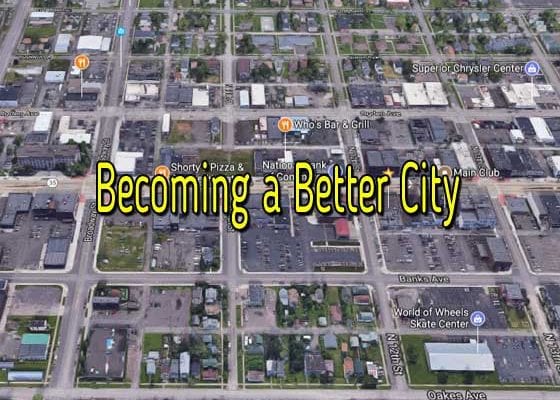 Will Superior Be Successful?

We’ve shared lots of information about the Better City Superior (BCS) initiative over the past year and a half. The group of motivated and concerned business professionals and public officials behind BCS propose a major re-development of downtown Superior.

Their vision includes a 150 room convention center-style hotel, an indoor water park for family fun, and a field house that would serve as a magnet for regional soccer league and tournament play. There is even talk of a corporate campus that would provide needed office space for companies that otherwise find it necessary to locate in Duluth for updated facilities.

Where is BCS Today?

Currently, the Superior Expo District has not made it into the state budget. However the budget, which is usually approved in July, as currently presented does not have sufficient support in the state legislature to get passed on to the Governor’s office.

Nonetheless, the influential political leaders that BCS head Bruce Thompson met with in the spring are still in favor of putting Superior’s Expo District into the budget, and he is hopeful they will succeed by the time the budget vote comes up.

Mr. Thompson indicated that some are suggesting the vote may not happen until late August or even after Labor Day. He is hopeful the BCS efforts will result in successful inclusion in the budget, but there is still work to do.

Your Voice Is Important

On July 1st, ES sent out our eNewsletter to our 5000 followers with a link to an online petition to Sen. Alberta Darling and Rep. John Nygren. By clicking on the link and filling out the form, BCS supporters can register their support and encourage these budget leaders to add the Superior Expo District to the State Budget.

We encourage you to click HERE and add your name to the list of Superior citizens who support BCS and the redevelopment of downtown Superior.

By sending the “Support Your City’s Future” form with your name attached, you can be a part of a citizen-led movement signalling to politicians in Madison that this is important to Superior tax payers.

If you are in favor of building a better Superior, we ask that you click HERE and register your support of Better City Superior and the Exposition District proposal. If you’re really committed, by all means call Sen. Darling at (608) 266-5830, or Rep. Nygren at (608) 266-2343.

The BCS team is getting closer, but they need your help to get over the top! See the BCS Facebook page HERE.

If this is your first time hearing about BCS, allow us to share some background info with you.

The BCS group formed about three years ago with the express intent of spurring growth and development in Superior. Spearheaded by Mr. Thompson of National Bank of Commerce, and supported by dozens of local organizations, BCS found an ally in the Better City US economic consulting firm originating in Ogden, Utah.

The Better City US firm came about thanks to the work of Matthew Godfrey, former mayor of Ogden, who had lead a renaissance of development in that town and has since brought his expertise and techniques to other cities nationwide.

As far back as November of 2015, Explore Superior reported on a community meeting that fall in which citizens were asked for their input into the development process. This and two other similar community meetings led to an online opinion poll that was conducted in early 2016 by BCS with the goal of putting together a comprehensive plan for redeveloping downtown Superior.

Explore Superior reported on the results of that survey in an extensive article published on September 16th, 2016.

In November of 2016, Superior residents were asked by advisory referendum their opinion of adding a ½% sales tax to retail food and beverage, and rental car fees, and a 2¾% tax to hotel/motel stays. The proposed sales tax will help fund development in downtown Superior through the creation of an “Exposition District”. However, to make this a reality the City would need to obtain permission to tax itself from the State of Wisconsin via the budget process.

Residents had the opportunity to voice their opinions on Tuesday, November 8th, 2016, and by an overwhelming margin of 75.5% approved the concept of forming an Exposition District in Superior and to tax themselves to make it happen.

With that positive vote in their pocket, the leaders behind BCS set their sights on storming the statehouse in Madison in hopes of making the voters dream a reality.

Although work on BCS had been ongoing for two years at that point, it was still necessary to get the decision makers downstate on board. Given Governor Walker’s reluctance to approve any new taxes, the BCS folks first began contacting and seeking the support of influential Republican leaders in both the state Assembly and Senate.

Efforts by both public and private leaders launched in full force in February with the annual Superior Days at the state capitol. During this visit downstate, leaders lobbied long and hard to encourage inclusion of the Superior Exposition District into this year’s state budget.

By April of this year, support for the Superior Expo District was growing in Madison as reported in ES on April 15th. Bruce Thompson and his team had several encouraging meetings with members of the Joint Finance Committee. In the State Assembly, Mr. Thompson had encouraging meetings with Rep. Dale Kooyenga (Brookfield), Speaker of the Assembly Rep. Robin Vos (Rochester), and Majority Leader of the Assembly Rep. Jim Steineke (Kaukauna).

Additionally, Mr. Thompson also garnered the support of State Senators Tom Tiffany (Hazelhurst) and Sheila Harsfdof (River Falls) who agreed to co-sponsor the BCS proposal. This along with the support of local representatives Rep. Nick Milroy (South Range) and Sen. Janet Bewley (Ashland) was encouraging and seemed to bode well for the future of the BCS proponents.

Through many visits to the state capitol with members of the legislature’s Joint Finance Committee, the BCS group has built bi-partisan support for creation of the Superior Expo District. This means that this project so important to Superior’s future is definitely in front of key decision-makers.

Nonetheless, there is still more work to do. The biannual state budget is normally approved by July 1st, but this year has run into delays due to the inability for elected representatives to come to majority agreement about what the final budget will look like. At the time, BCS asked its supporters to speak out to their elected representatives in late June.

If you are in favor of building a better Superior, we ask that you click HERE and register your support of Better City Superior and the Exposition District proposal. If you’re really committed, by all means call Sen. Darling at (608) 266-5830, or Rep. Nygren at (608) 266-2343.

Sign-up HERE to receive the Explore Superior eNewsletter. You may unsubscribe at any time.