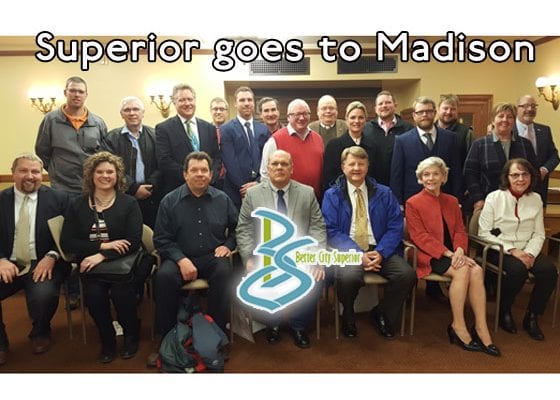 Busload of Superiorites Descend on Madison

On a cold Tuesday morning in January, a baker’s dozen of concerned citizens boarded a bus in downtown Superior. After a pep talk by Bruce Thompson, head of Better City Superior, the group settled in a for a five hour drive to Madison and the State Capitol.

The group was comprised of supporters of the proposed Exposition District slated for downtown Superior, including two city councilors, a county supervisor, heads of local business associations, educators, business people, and representatives of labor.

The Wheels of Government Move Slowly 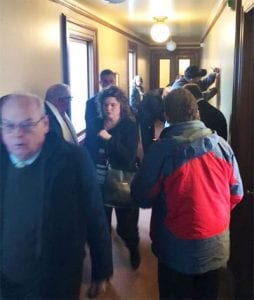 Arriving shortly before 1:00 pm, in hopes of being heard by the Senate Committee of Agriculture, Small Business and Tourism by 2:30 pm, the group was in for a wait.

After loitering in hallways and side rooms for over four hours, the group was finally escorted into the committee room at 5:30 pm in time to hear an hour of testimony regarding the recovery of wasted poultry for food banks.

Finally at 6:30 pm, last on the day’s agenda, the Superior delegation had their chance to be heard. Senators Janet Bewley (D) Ashland, and Terry Moulton (R) Chippewa Falls, sat before the committee prepared to plead the case for Senate Bill 727. 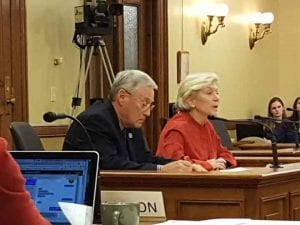 Sen. Bewley spoke first, asking for bipartisan support for the proposal, sharing how the supporters of the proposed Exposition District for Superior had been working on this goal for five years.

As Assistant Minority Leader in the Senate, she urged the committee to give this bill a thumbs up because it was good for Wisconsin.

Sen. Moulton, who also chairs the committee that he spoke before, echoed her words and stated that the proposal was intended to promote economic growth in small-town Wisconsin

Committee member Sen. Chris Larson (D) from Milwaukee asked if they would consider expanding the Exposition bill from Superior and Eau Claire to other communities in the state.

While Sen. Bewley was respectful of Sen. Larson’s comments, she advised him that SB 727 only came about due to the long, hard work of dedicated Superiorites. While she agreed that other communities could pursue this down the road, she ended her testimony by saying, “The City of Superior needs this!”

Bruce Thompson, Better City Superior head, spoke of the challenges faced by a smaller city toiling in the shadow of a larger, more prosperous city such as Duluth. 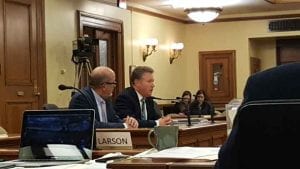 He went on to say that lacking the same tools and State support that Duluth benefits from, Superior is at a disadvantage.

Mr. Thompson explained how in his lifetime, his community has lost population consistently for over fifty years. Superior has sustained a loss of over 6000 residents since 1960, or 120 souls each year, ten people every month, year in year out.

Continuing, Mr. Thompson stated that Superior is simply asking for the right to tax itself in order to grow. He spoke without notes from his heart, in a resolute and determined manner for fifteen minutes.

He also explained how he has watched as retail spending in Superior has migrated to Minnesota. This has been accentuated by the loss of two big box stores with the departure of K-Mart and Target. Compounding the loss in retail sales is the fact that clothing is tax free in Minnesota, compared to Wisconsin which charges 5½% sales tax.

In closing, Mr. Thompson explained to the gathered Senators that the current retail food sales tax in Duluth is double that of Superior’s. The BCS Head did an excellent job of describing the challenges facing Superior. With great clarity he urged the Senators to give his city the chance to improve itself.

With the recent addition of Eau Claire to the Exposition District legislation, Dave Minor, Eau Claire Chamber President (formerly President of the Superior Chamber) spoke next.

Mr. Minor explained that upon arriving in Eau Claire six months ago, he heard time and time again from his new constituency that they wanted to join Superior in their exposition district efforts.

Eau Claire, while more developed with greater amenities in its downtown than Superior, has a desire to build its own convention center.

Mr. Minor pointed out that the outlying cities of Wisconsin came on board in support of building a new stadium for the Packers, a new center for the Bucks, and for improvements to Wisconsin Dells.

He asserted that “we have created things for the rest of the state, now we ask for your support for our communities.”

New Mayor Speaks Out for a New Tomorrow 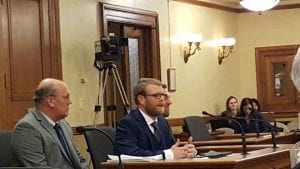 An impassioned Mayor Jim Paine spoke with great urgency and told the assembled Senators he was not asking for money, but instead the tools to make a better Superior.

City Councilor Keith Kern explained to the Senators that it is hard to retain young people in Superior as it stands now. The amenities that attract youth are lacking, and Superior high school and college graduates leave for greener pastures at the first opportunity.

Having lived in the shadows of Duluth his entire life, Mr. Kern has no interest in trying to compete with our neighbor, but instead hopes to complement Duluth.

As the owner of Jimmy’s Bar in Billings Park, Mr. Kern explained to the Senators that the Douglas County Tavern League supports the Exposition District and its ½% sales tax by a margin of 80%.

Norm Vorhees of the NW Wisconsin Construction Trades Council supports SB 727 for the potential economic development it can bring to the city. He went on to say that it will bring new construction jobs, and when done will create spin-off jobs in hotels and restaurants that will spur economic growth that will drive and sustain the local economy. 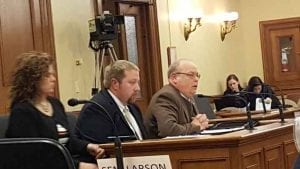 Jim Caesar of the Development Association, wrapped up the pitch for passage of the Expo District legislation by saying “Duluth has one thing that Superior does not have, the amazing city of Superior across the bay!”

Should Have an Answer Soon!

The State Assembly and Senate have until the end of February to approve this bill or it will be delayed until 2019. 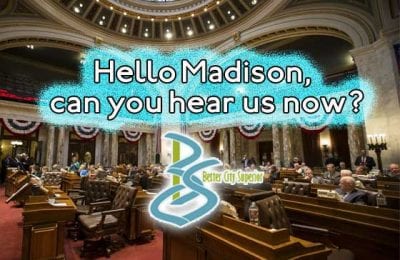 Five Year Effort Close to Success? Explore Superior has been advised that after years of hard work, and with voter...