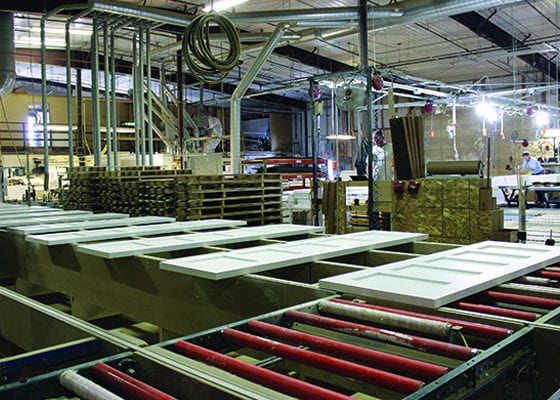 IHS Door Co. Has Steadily Increased Its Commercial and Residential Customer Base by Manufacturing Products That Surpass the “Slam Test”

Aside from the wheel (whether it’s on a car, bike, bus or other public transport), what other object do most people employ multiple times every single day? How about this: the door.  So it’s a good thing there are quality companies out there whose sole job is to make doors of all kinds for both commercial and residential customers, and specially constructed in a manner that is unique.

In Superior, IHS Door Co., located at 1505 N. Eighth St., is just such business. Since it was launched over a decade ago, IHS has created a manufacturing niche for itself through its trademarked STILEChoice® door brand. In fact, this business has steadily grown from initially serving several customers to increasing the client roster to double digits.

Zak Richmond is the plant manager at IHS. His father, Keith, started the business, and Richmond said he was there almost right from the start, explaining that his dad “was in wood flooring and door manufacturing. He thought more or less that he had retired from the business.”

“We were doing everything you need to do to put a business together … talking with customers, programming and running a CNC machine to make the parts, running shapers and saws.”
– Plant Manager Zak Richmond

But as it turned out, owner Keith Richmond went a different route. He had tested out equipment and built a prototype in his home shop of the kind of door IHS now manufactures and sells. At the time, the younger Richmond had a career in software development, but “We had discussed what the business would look like,” he said. “I’ve been here since the beginning, really. There was a little bit of time where the buildout was happening when I wasn’t here, although on my first day on the job, they were still doing buildout in the plant. That was the end of August 2007.”

Richmond didn’t start as plant manager. “There was no plant to manage at the time,” he said with a laugh. “I’ve always been a pretty key person in the organization. My job has changed over the years. I think my title when I started was assistant engineer and manager, or something like that. We made something up so I had something to tell people.”