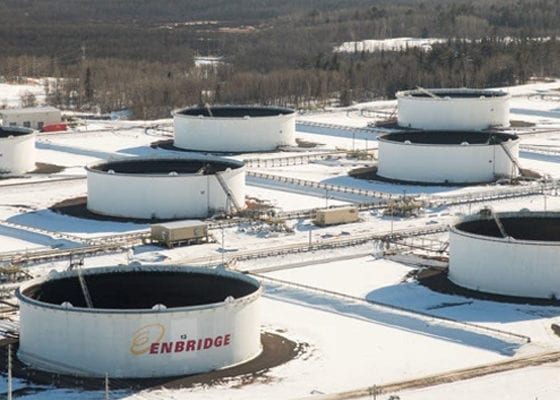 Enbridge Energy is proposing to replace a 10-mile section of an oil pipeline that crosses the reservation of the Fond du Lac Band of Lake Superior Chippewa in northeast Minnesota.

The Canadian company has filed an application with the Minnesota Public Utilities Commission to replace a section of its Line 4 pipeline — which was built above ground — with a new section of underground pipe.

Enbridge said the proposal comes at the request of the Fond du Lac Band. Enbridge and the band are also asking state regulators a streamlined permitting process for the project.

The $100 million proposal is “the result of the Band’s requirement that Enbridge address the Band’s concerns over the above-grade segment” of the pipeline that runs through the reservation, Fond du Lac Chairman Kevin Dupuis Sr. wrote in a letter of support to the utilities commission.

Dupuis explained in his note that the pipeline has disrupted natural water flow across the reservation, and “also functions as a physical barrier, affecting not just wildlife crossings but Band members’ ability to access areas where they gather medicinal plants and other culturally important resources.”

Enbridge asserts that Line 4, which was built in the 1970s, continues to operate safely. Some sections of pipe were intentionally built above ground in areas of heavily saturated soils and then covered with soil.

But over the years, some of that soil has eroded away, and some band members have expressed concerns about exposed sections of the aging pipeline on the reservation.

The commission voted to accept the application from Enbridge at a hearing Thursday. Commissioner John Tuma noted that he could actually see the exposed pipeline using the Google Earth mapping program.

After installing the new 36-inch pipe, Enbridge proposes to remove the old 48-inch pipe segment, a step the company said would make the area more accessible to tribal members and “help restore traditional land use” for the band.

Enbridge also argued Thursday that an underground pipe would better protect Line 4 from what it called third-party damage.

The band said it has provided “significant input to Enbridge” on the project, and has already completed work on a survey of cultural resources along the project route. The Fond du Lac Band told the Public Utilities Commission its preliminary conclusion is that no resources or historic sites will be disrupted by the pipeline replacement.

Line 4 is part of the Enbridge mainline, a…(read more)

Ice Breaker: The Canadian Coast Guard decided ice breaking was a great ice breaker to encourage new recruits. According to...

Photojournalist Derek Montgomery and MPR News bring amazing images of the annual breaking of the ice on the Duluth Harbor....