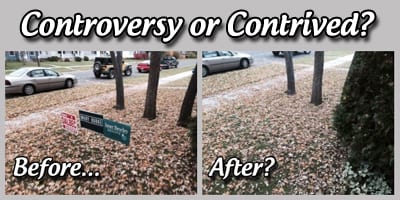 Late last week numerous political signs, both Democrat and Republican, went missing on Douglas County roads including Highways 2, 53, and 35.  They were taken to the County Highway Garage in Hawthorne. The litmus test for sign placement is 50′ from center of a highway.  In the City of Superior, signs must be at least 4′ in from house side of a public sidewalk. In the absent of a sidewalk, presumably the same standard would apply in relation to the ditch in front of a home or business.

One of our intrepid undercover reporters contacted Susan Sandvick, Douglas County Clerk, for clarification of rules regarding political yard signs.

What follows is her explanation of these rules:

“It is very clear that political signs are not to be placed within highway right-of-ways, and highway departments are legally allowed to remove any encroachments within that right-of-way. The State DOT recently issued a press release advising campaigns of this fact, and I also received a complaint last week regarding several illegally-placed signs. I informed the candidate and notified the DC Highway Department, as is my common practice.”

According to Jason Jackman, Interim Highway Commissioner, one employee removed all signs within the right-of-way over a several day period and the department received complaints that some of the signs may have been legally placed. In subsequent discussions with the DOT and clarification of guidelines, Jackman said that the department will continue to remove signs when a complaint is received, as well as those placed along the roadside that are inside of the ditch, and those in vision triangles at intersections. The County does not and will not actively “police” sign placement, said Jackman.

Note: The photos used in this post are for demonstration purposes only, and do not reflect the actions of any public employees.