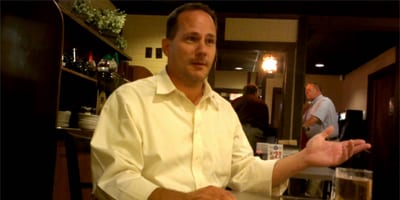 Robert Burke is a 44 year old native of Plainfield, Illinois, and a 1987 Illinois Boys State attendee. His family spent most summers at the family cabin in northern Door County. After serving as a crew chief on B-52s in the Air Force, Burke has pursued a career in the health care field working in a variety of environments, both long and short term care.

After leaving the Air Force, Burke returned to college and graduated in 1997 from the University of Wisconsin-River Falls with the first class of graduates from the university’s new, marketing communications program. His primary career background is in helping families with the issues of long term care. Burke worked for twelve years with insurance agencies and financial advisors, training on the benefits of long term care planning.

Burke has admitted that he’s taking advantage of Democrat Mary Burke’s name recognition, and that confused voters may vote for him by mistake. When asked by Frederica Freyberg of Wisconsin Public Television about this issue he said “I won’t shy away by any stretch of the imagination from the idea that name ID is a million-dollar proposition and I’m taking advantage of that this election season.  I think it’s a good election move and I think anybody that’s done elections would endorse that idea that it was worth taking advantage of that”. He went on to say “we know the name recognition will be there. And so as individuals hear that Robert Burke is running as a Libertarian and they hear my ideas, the difficulty won’t be recalling who it was who told you that — it was a Burke; it happens to be the Libertarian one. And so that’s how it definitely works in my advantage.” Burke’s interview on WPT can be viewed here.

There is no familial relationship between the two Burke’s who are running for governor.

Burke believes that Wisconsinites need to work harder to understand the effect our government’s policy really has on our poor. He states that “effort after effort with good intentions has created a much larger problem that will not be solved with the same consciousness”. Burke believes in the following tenets of the Wisconsin Libertarian Party: individual liberty and personal responsibility; a free-market economy of abundance and prosperity; and a foreign policy of non-intervention, peace, and free trade.

In a YouTube video recorded in Marinette, Wisconsin and published on September 30, 2014, Burke said that marijuana should be legalized and that he would like to “see if somebody wants to come to Wisconsin and build a 3D house printer using hemp”. He also asserted that “concrete is very expensive because they’re using it all in China”. Watch the video below…the above quotes appear between the :25 and :58 second marks of the video.

Laid off in May 2012, Burke has since been raising his two daughters and enjoying time with his wife. His favorite place for family time is aboard their sailboat Northern Harmony on the waters of Door County.