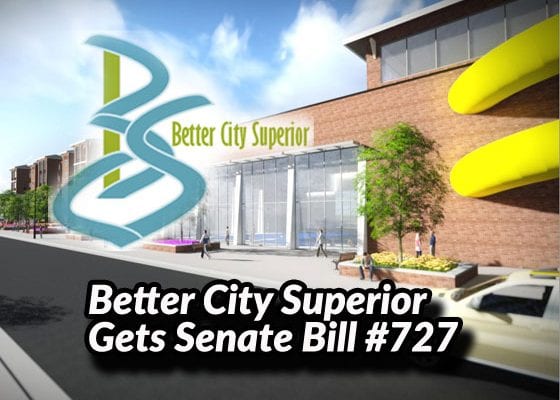 Explore Superior has been advised that after years of hard work, and with voter approval by a vote of 75.5% in favor back in November of 2016, the Better City Superior (BCS) initiative will finally come before the Senate for a vote. This caps a five year effort by BCS, led by Bruce Thompson of the National Bank of Commerce.

The BCS group faced disappointment late in the summer of 2017 when the proposed Exposition District planned for Superior was left out of the state budget at the end August.  At that time the BCS team began a new effort to achieve their goal by working on a new stand-alone bill to introduce in the current session.

After two and a half years of constant efforts to curry favor in the halls of the state capitol in Madison, this may well be the next best chance BCS has of passage. Failure to pass it in this session will necessarily postpone further efforts until 2019.

According to Thompson, BCS recruited the city of Eau Claire to become a co-sponsor of these efforts. Eau Claire has a vibrant and growing downtown, and could benefit from an Exposition District of its own. With former Superior Chamber of Commerce President Dave Minor now at the helm of the Eau Claire Chamber, Thompson and his team found an enthusiastic partner.

By working with Superior on this project, Eau Claire has the opportunity to join in the benefits of an Exposition District to further develop and refine its downtown.  To that end, companion bills allowing Superior and Eau Claire to utilize the economic development benefits of an Exposition District have been introduced. This is a privilege previously only permitted in Milwaukee.

The language from the supporting memorandum SB 727 states:

“We are all aware that Foxconn recently received the largest taxpayer funded economic development incentive package in state history.  Foxconn will receive significant state investment as well as additional incentives for road and utility improvements to transform southeast Wisconsin into a high-tech manufacturing hub.   SB 727 is a bipartisan effort to support economic development in Western and Northern Wisconsin and does not require any assistance from other state taxpayers.”

The memorandum goes on to state:

Thompson is confident that the voters of Superior will continue to support the goals of Better City Superior. He shared with ES that a public hearing before the legislature will be happening quickly because there is not much time left in the current session.