Home Community Being Muslim in Superior

Being Muslim in Superior

“People here aren’t as phobic compared to other places where they attack Muslims. Here people are so nice and respectful. It gives me confidence to practice my religion,” said Mualige Keita, a sophomore at UW-Superior.
Keita was born in Guinea in Western Africa. He moved to Minnesota with his parents who are very devout Sunni Muslims. “Before I came here my family put my in Qur’an studies. I would go to my normal school in the morning and then religious school afterwords.”

He has not had any negative experiences related to his religion while living in Superior. “I’m on the soccer team, and I’m involved with the mentor/leadership program…in school, they let you practice your religion. I was really surprised they give us a special place on campus to pray; it’s really nice.”

Muktar Alati came to the United States from Lybia before the Arab Spring began. It was important for him and his family that he study abroad. “If you stay in only one country you’ll have only one viewpoint.”

On being a Muslim and living in Superior, Alati echoed the feelings of Keita. “Superior is really nice and friendly. I practice my religion and no one bothers me.” When Muslims are bothered, it is usually because of their association of the Islamic State, Alati said, which is “destroying the image of Islam.”

“People in Western countries listen to the media more than they’ll sit with a Muslim person. What they hear from the media is all they know. They think it’s all they need to know… we know our religion is not harming people. The word Islam comes from salaam, which means peace.” He added that he feels the Islamic State shouldn’t be fought with weapons, “it should be fought with education because it is a disease of the mind.”

Alati added that there is a difference between being a man and a women practicing Islam. Islam calls for women to wear head scarves, or hijabs, covering their hair.

Deborah Faul is a professor of writing and English as a second language at UW-Superior. She moved to the Twin Ports just after Sept. 11, 2001.

“There was not even the slightest incident. People were very welcoming. People were coming up to me in Target and on the street to say they’re happy to have me here–that’s all still in Sept.”

Faul moved here from Oman but was born in the U.S. She said wearing her headscarf has not caused any negative experiences for her, but people often stare at her and “sometimes the stares are unfriendly.” Otherwise she feels wearing her headscarf let’s people know she is Muslim and prompts them to ask questions about it. “I think a lot of people think maybe this is their chance to ask questions.”

Being a professor, she meets a lot of young people. She has had no negative experiences with her students relating to her religion, but one experience sticks out in her mind. “In 2004 I had a couple of young women in my writing class. At the end of the course they asked why I always wore a headscarf. I knew this girls were in the military and about to be deployed overseas.” She said it was concerning to her that women who were soon going to the Middle East did not already know why women wear a headscarf.

On her experience with the community, she said she cannot speak for everyone and has heard stories from international students about having cans and bottles thrown at them. Over the last few years, though, she has heard these stories less.

“Over the last few weeks with Donald Trump and the attacks in Paris and San Bernardino, people have been really wonderful and supportive. It’s a sign of how great this community is.” 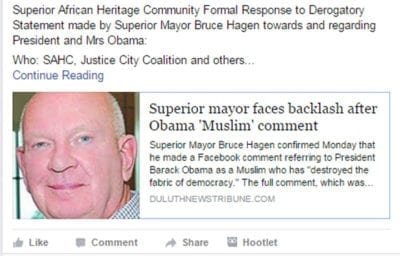 More in Community, Lifestyle, UW-Superior, Why I Live Here

Changes coming to DTA 16 and 17 routes

Over the River and Through the Woods

Bewley Column By Senator Janet Bewley Although we might not have a lot of snow on the ground, it is...