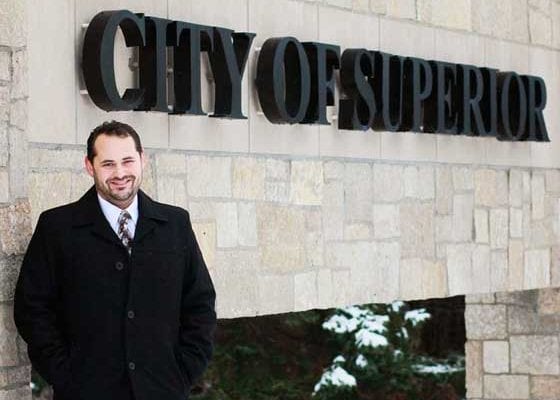 Tylor Elm, co-owner of discoverpc.NET Computer Solutions Center on Tower Avenue is running for the council seat currently held by Graham Garfield in the 6th District of Superior. This is Elm’s first attempt at seeking political office and he feels he can help bring positive change to the 6th district.

The 6th council district is located in the heart of Superior, including downtown from Oakes Avenue to Catlin Avenue, and from North 11st Street to North 17th Street.

Elm states that he has a passion and vision to improve Superior’s image, job outlook, and housing quality and availability. He is also committed to safety and is concerned about the opiate abuse problem facing our community.

His campaign website states his opinion that Superior has a lot to offer, and that he believes that “some residents aren’t even aware of all the opportunities, services, and experiences that are available.” Related to that, he hopes to strengthen a sense of community in Superior.

In his platform, Elm pledges to conduct himself as follows:

Elm goes on to describe his background and qualifications:

Elm’s website lists several endorsements for his candidacy including:

For more information regarding Elm’s candidacy or to contact his campaign, use the following sources:

*The following letter of support for Elm’s candidacy was received by ES prior to publishing this article. We include it here at the request of Dr. Bob McClellan.

I feel very fortunate to have known Tylor Elm for the past 4 years. I first met Tylor when he joined the Superior Noon Rotary Club. Tylor is selfless in his volunteer efforts and truly is motivated by the fact that he can make a positive impact in his community.

Tylor and I were part of the Superior Sister City delegation to Ami Machi in 2014. Tylor was the adult chaperone of the student delegation, and we spent many hours together, planning, fundraising, and recruiting students for the trip. He has been a committed board member of the Superior Sister City Commission since that time, helping with the hosting of the 2015 Delegation from Japan.

As a partner in Discoverpc.NET business, Tylor is part of the very positive impact on the “new” Tower Avenue. Anyone who has used the services of this business, besides experiencing his great depth of knowledge in digital technology, would see what high ethical and moral standards he brings to his customers and clients as well.

As a future Superior City Counselor for the 6th District, Tylor would definitely represent the people and businesses in that area well, both living and having a cornerstone business in his district. Tylor will continue to make a difference in our community in the coming years.

Editor’s Note: ES reached out to Graham Garfield upon receiving Tylor Elm’s information, asking if he would care to forward similar information regarding his campaign. At the time this article was published, ES has yet to receive any information from the Garfield campaign. Should a statement be issued to us prior to the polls opening next Tuesday, we will surely publish it.