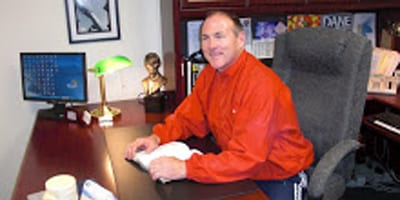 Dane Deutsch is running for the Wisconsin State Senate, District 25, the seat that has been held for the past three decades by the retiring Bob Jauch.

Deutsch is 57 years old, married and has four children. He is an owner of three businesses, and a retired USAF Captain. He was named Wisconsin Businessman of the Year in 2002. Deutsch earned an undergraduate degree in pre-medicine while obtaining his commission as an officer in the Air Force ROTC program at the U of W, Superior. In 2012 he earned his Masters degree in Information Communications Technology from the U of W, Stout. Previously ran unsuccessfully for this seat against Bob Jauch in 2010.

Economic Opportunities – states that “overregulation from agencies such as the EPA, the FTC, the SEC, and hundreds of additional agencies has assumed more power to control the economic well-being of our nation than legislative branches have. New leadership must eliminate or reign in these agencies and restore power to the three branches of government and to the people.”

Stance on Government – wants to return balance to government and to reassert the principles of the Constitution. Believes in a fiscally responsible government, and states rights.

Education – wants to reinstate state and local control of education.