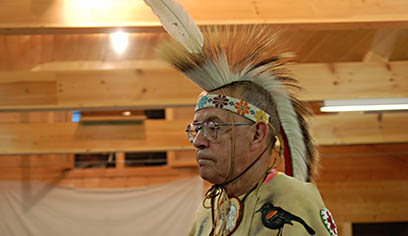 SUPERIOR, Wis. – To celebrate the 125th anniversary of the founding of the University of Wisconsin-Superior, the university’s Alumni Association has named 25 Outstanding Alumni. In this group of notable graduates and students is the late Dr. John “Little Bird” Anderson, a member of the Lac Court Oreilles Band.

Anderson, who passed away in 2016, earned his bachelor’s degree in 1962 and master’s degree in 1966 at UW-Superior. His career included service as LCO Tribal Chairman, and as a teacher, principal and administrator at several schools. He was a founder and first president of Lac Courte Oreilles Ojibwa Community College, and founder of Native American Studies programs at the University of North Dakota, The College of St. Scholastica, and Mount Senario College. Anderson was also a notable Anishinabe spiritual leader, a recorded musician, and an avid runner, twice completing the Boston Marathon.

Anderson and his fellow new inductees were added to the roll of Outstanding Alumni created in 1993 for the UW-Superior Centennial.

The Alumni Association, with a history of more than 100 years, fosters lifelong pride and loyalty among alumni, students and friends of UW-Superior. During the anniversary year, the association is sponsoring a series of Alumni Forums on the university’s history and roles, and the publication of a commemorative anniversary book.

Gone To The Dogs

For the past few months, Sandy Thompson, sous chef at Chartwells, has been turning leftover food into healthy dog treats....

Program to Benefit Teachers The Wisconsin Department of Workforce Development has awarded a Wisconsin Fast Forward Dual Enrollment Grant to...