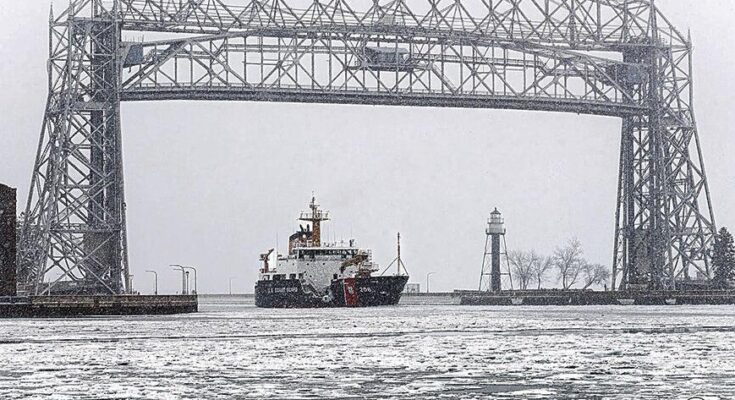 The 225-foot Juniper class buoy tender will now be homeported in Duluth and already did some ice breaking on its two-week journey up from Baltimore, through the St. Lawrence Seaway system, the Soo Locks and across Lake Superior.

“For us to get through Whitefish Bay, we needed to get the other vessels through,” Lt. Cmdr. Joel Wright said of exiting the Soo Locks. There are at least a half dozen other vessels breaking through the ice there, some of which will arrive in Duluth today.

Wright said it’s appropriate this Spar, once stationed in Alaska, is now home in Duluth where the first Spar, a 180-foot sea-going buoy tender, was built during World War II. It was built at the Marine Iron and Shipbuilding Company in Duluth, launched on Nov. 2, 1943, commissioned in June 12, 1944, and  decommissioned in 1997. Both were named for the USCG motto “Semper Paratus, Always Ready.”

Today’s Spar, launched in 2000, was built in Marinette, Wis., like the USCG cutter Alder that it replaced. The Alder left Duluth in July 2021 for Baltimore, where it will remain until this July for maintenance and repair work before being reassigned to San Francisco. The crew of the Alder, however, is now the crew of the Spar. The crew is slightly under its usual 48 members, but most of them served last summer on the Alder, many sailing with it to Baltimore. Most of the crew returned to Baltimore in January to work and train on the new vessel.

Getting all of the mechanical parts on the Spar operating again after almost a year out of service was a challenge, Wright said.

“The engineer equipment does not like to sit still for a year.”

During that period, the cutter was repaired or upgraded including with a new crane for its major task of buoy tending.

Wright, who said the cutter’s duties will be the same as the Alder’s, added that buoy placing operations will get under way as soon as conditions allow, probably sometime in April.

Meanwhile, the Twin Ports welcomed some other notable vessels today. The Great Lakes Fleet’s Arthur M. Anderson, the Great Lakes freighter famed for its brave search for the Edmund Fitzgerald during the 1975 storm,

Duluth is an economic development leader, Mayor Emily Larson said Tuesday in her annual State of the City address.“Last year...

One More Day: One minute after midnight on Friday, the U.S. Army Corps of Engineers will open the Poe Lock...