Bayfront Hotel Site to be Discussed

Superior Bayfront Hotel was demolished in late March of 2015. The property is located at 110 E. 2nd Street, Superior, WI

There will be a Closed Session of the Superior Common Council this evening (Oct. 20th) in Conference Room 204 of the Government Center from 5:30-6:30 p.m. The topic of the meeting is a proposal by Oliver Companies to build a hotel on the former Bayfront Hotel site.

According to a memo from the Mayor Bruce Hagen to the Common Council dated October 14th, there is a proposal, presumably from Oliver Companies, that the City participate in some way in the construction of a new hotel.

The meeting is being closed subject to Wisconsin Statute Section 19.85 (1) (e) which cites the following:

“Deliberating or negotiating the purchasing of public properties, the investing of public funds, or conducting other specified public business, whenever competitive or bargaining reasons require a closed session.”

The regular Common Council meeting will follow the closed meeting beginning at 6:30 p.m. in the Board Room #201 of the Government Center. There is nothing on today’s agenda regarding an Oliver Companies proposal.

The Bayfront Hotel was originally built in 1968, and flew the flags of various hotel franchises over the years. Oliver Companies purchased the property in 2000 and operated it as a Days Inn for several years before rebranding it as the Bayfront Hotel a few years ago. The hotel had been closed for sometime, and was demolished in late March of this year.

Earlier this year, a spokesman for Oliver Companies was quoted as saying they cannot develop the property until the City of Superior allows them to. Since the City has taken a welcoming stance at new development, it seems unlikely that the City would bar the company from building a new hotel, particularly on a site that was formerly used for the same purpose.

One can only guess that finances come into play in this decision, and the call for a closed meeting would seem to indicate that Oliver Companies is seeking City involvement in a financial manner of some sort in order to proceed with new construction.

A proposed hotel for an area adjacent to the Bong Memorial Center was derailed last year due to reported infringement on the waterfront. That proposal came from the ZMC Hotels of Duluth, Minnesota. Explore Superior was advised by a member of the Common Council that Oliver Companies had opposed that development.

Oliver Companies is a Duluth based company that also owns Barker’s Island Inn and the Holiday Inn Express in Superior, as well as numerous other hotels in Wisconsin, Minnesota, Michigan, Iowa, Georgia and Florida.

60 Room Hotel to be Built 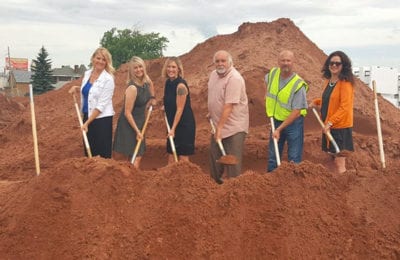