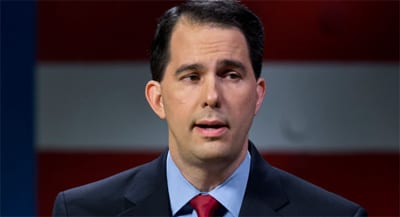 This is the second installment of our series of articles about the candidates on the official Sample Ballot for Superior. For our previous article on Mary Burke, click here.

Scott Walker was born in Colorado Springs, Colorado in 1967, he is currently 46 years old. His family moved from Colorado to Plainfield, Iowa, and then when Walker was ten years old, they again relocated to Delavan, Wisconsin. While still in high school, he attended two weeks of American Legion sponsored leadership training at Badger Boys State, and later at the selective Boys Nation in Washington D.C. Walker also earned the highest Boy Scout rank of Eagle Scout, and graduated from Delevan-Darien High School in 1986.

While attending college at Marquette University in Milwaukee, Walker volunteered to work on Governor Tommy Thompson‘s campaign, became a student senator, and ran unsuccessfully for class president. Walker worked part-time at IBM as a salesman while taking classes at Marquette, which led to a full-time position in marketing and fundraising at the American Red Cross. He dropped out of Marquette to accept this position, and worked for the Red Cross from 1990 to 1994.

Walker ran for his first government office in 1990 at the age of 22, winning the Republican nomination for Milwaukee’s 7th district seat in the Wisconsin State Assembly. He lost in the general election to the incumbent Democrat Gwen Moore. To date, this is the only race for public office that Walker has lost. He then moved to the then-predominantly Republican city of Wauwatosa, and won a special election there in 1993 over Democrat Chris Ament, who is the son of the then-Milwaukee County Executive Tom Ament.

While a member of the State Assembly, Walker specialized in criminal justice matters, and chaired the Committees on Correctional Facilities and Corrections and the Courts. He also served on other committees including, Health, Census and Redistricting, Financial Institutions, and Housing. He was re-elected to this seat four times, and served until 2002. In 2001 Walker was the lead sponsor of a bill to prevent pharmacists from being disciplined for refusing to fill prescriptions for emergency contraception. He was also a strong supporter of voter ID requirements.

After the former Milwaukee County Executive Tom Ament resigned in 2002 as a result of a county pension fund scandal, Walker ran in a special election and won the seat. He was re-elected to a four-year term in 2004 with 57% of the vote. Walker won another four-year term in 2008. He positioned himself as a fiscal conservative, and gave back $60,000 per year of his salary (slightly less than half of his salary) for several years, until 2008 when he reduced his give-back to $10,000 annually.

While County Executive, Walker presided over disputes with the county board over taxes, privatization, and social services. Several budgets were approved over Walker’s veto, and he never submitted a budget raising property taxes. The number of county employees declined by 20% and the county’s debt was reduced by 10% during Walker’s tenure in office.

Walker experienced a financial scandal while County Executive due to the actions of two of his appointed staffers. Kevin Kavanaugh, who was appointed by Walker to the County Veterans Service Commission, and served as treasurer of the local chapter of the Military Order of the Purple Heart, was arrested along with four others for theft of benefit funds from that organization. Kavanaugh was convicted of theft and sentenced to 21 months in prison. Tim Russell, who was Walker’s deputy chief of staff and Milwaukee Housing Director, was implicated in the same investigation and pleaded guilty in late 2012 to diverting more than $21,000 to his personal bank account. Walker was not charged with any wrong doing in either of the above cases.

Walker first ran for governor in 2006, but withdrew after 14 months of campaigning due to fundraising difficulties. He then supported the Republican candidate Andrew Green, who lost to incumbent Democrat, Jim Doyle. An early favorite for the 2010 Republican Party endorsement, Walker won the nomination with 91% of the votes cast by delegates, and later the primary election with 59% of the popular vote. He won the general election on November 2, 2010 (his 43rd birthday) with 52% of the total votes cast. His challenger Tom Barrett received 46% of the vote.

A fiscal conservative, pro-life politician, Walker quickly rose to national prominence with the Wisconsin budget repair bill of 2011. The eventually passed through the Wisconsin legislature amid much tumult and public protest, and significantly changed the collective bargaining process for most Wisconsin public employees. As a result, a recall election campaign was launched by Walker’s opponents, and an election was forced on June 5, 2012. This was the first time a Governor of Wisconsin had ever faced a recall. Walker successfully defended his seat against his former opponent Tom Barrett by a margin of 53% to 46%. This made him the first U.S. Governor to successfully defend the governor’s seat in a recall election.

Governor Walker has been accused of attempting to illegally subvert campaign finance laws during his recall campaign. One group, the Wisconsin Club for Growth is alleged to have worked with Walker to coordinate fundraising efforts with a number of outside conservative groups to help him in the 2012 recall election. This case has worked it way through the courts at multiple levels since 2012. At various times the case has been found to have no legal basis, only to have those rulings overturned by higher courts. There are no allegations that the Wisconsin Club for Growth gave money to Walker, or even advertised on his behalf. It seems that this issue has fallen strictly along party lines, with investigations all being launched by five Democratic district attorneys from different Wisconsin counties.  According to the Wall Street Journal, it is “legal and common” for politicians to raise money for political action committees, party committees, and 501(c)(4)’s. At this time is seems that legal action in this case is stalled.

As stated in the previous article about Mary Burke, we will not address specific plans, programs, or philosophies of Scott Walker in this article, preferring instead to give an overview of each candidate to help familiarize voters with their background.