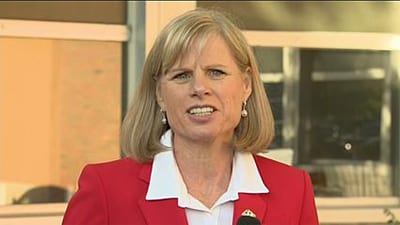 Today Explore Superior begins our exploration of the Sample Ballot for the City of Superior. We will go through the ballot from top to bottom, and attempt to give our readers an overview of each candidate by using sources such as Wikipedia, various fact-checking websites, and the candidates own campaign materials. These pieces are not meant to endorse candidates, but instead to present an unbiased picture of who they are. We’ll let the political pundits handle the politics of the campaign, our goal is to help you get to know the candidates, their background, and what they’ve accomplished in their lives.

Your author acknowledges going in that he has little knowledge of most of the candidates, so this will be informative for him as well. Our first candidate profile is of Mary Burke, Democratic candidate for Governor.

Mary Burke was born in Madison, Wisconsin on April 30, 1959, and is currently 55 years old. Raised in Hartland, Wisconsin, the daughter of Trek Bikes founder, Richard Burke, she later attended Georgetown University, earning a degree in finance, and then Harvard Business School. She earned her master’s of business administration from Harvard in 1985.

Upon graduating college, Burke put her MBA to use as a consultant in New York City and Washington D.C., working for McKinsey & Company. She also operated her own consulting company for a brief time. Returning to Wisconsin, Burke went to work for Trek, first as head of their European operations, and later as director of strategic planning. She was appointed as Secretary of Commerce for the state of Wisconsin, assuming office in January of 2005, under then Governor Jim Doyle, and served in that post until November 2007. She left this post to spend more time on family interests and non-profit work.

Burke has shown an interest in homeless and youth issues.  She is active in the Boys & Girls Club of Dane County, and supported Madison Prep, a charter school. Burke donated $450,000 to The Road Home, a nonprofit agency serving homeless families in Dane County. She led a 2008 study on the financial trouble facing Milwaukee schools, and was elected to a seat on the Madison school board in 2012. During the run-up to that election, Burke spent $128,000 of her own money on the campaign.

Burke, along with teacher Kate Brien, helped found AVID/TOPS, a non-profit dedicated to helping youth to become the first in their families to attend college.  She was named one of Madison Magazine’s 2011 “People of the Year“. Burke is not married, has no children, and is a resident of Madison.

Burke announced her candidacy for Wisconsin Governor on October 7, 2013. She is running for the Democratic party, and is challenging Republican Governor Scott Walker, as well as Peoples Party candidate Dennis Fehr, and Libertarian candidate Robert Burke (no relation). Burke presents herself as moderate who’s goal is to move past partisan political fighting that has prevailed in the Statehouse for the past several years. Her stated goal is to solve problems, not pick fights. For an overview of Mary Burke’s background, see her personal profile as displayed on her campaign website here.

We won’t get into fact checking in this article, instead leaving that to closer to the election. Nonetheless, Burke has endured some controversy during her campaign at the hands of a hired political consultant. Her campaign recently fired Eric Schnurer, who had worked on the Democratic gubernatorial campaigns of candidates in other states, after it was revealed that he had copied their proposals when helping to create Burke’s “Invest for Success” jobs plan. A quick internet search reveals that an attack website has been created using Burke’s name and labeling her a plagiarizer. To read an MSNBC report on this issue, follow this link.