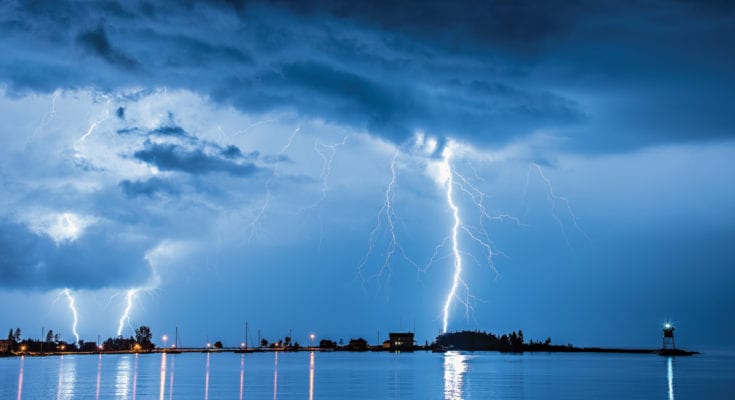 Lightning and the Lake

A Striking Look at Our Summer Storms

The most likely time to spot lightning on Lake Superior is between the third week of June and the second week of August, says Matt Zika, warning coordination meteorologist at the National Weather Service station in Marquette. But even during those hot-summer weeks, you’re not going to be seeing as much T-storm activity as above land-bound prairies.

The photographers who took these images were in the right places at the right times (and, we assume, took the right precautions to be safe).

Lake Superior, chillier than the air in summer, inhibits development of storms over the Lake, unlike the lake-affected winter, fall and spring months when the warmer-than-air water can act as a storm generator. This means that our Lake region actually endures thunderstorms less frequently than other parts of the U.S. and Canadian Midwest.

Previous PostCityscapes & Shorelines Next PostWelcome to the Big Lake

Welcome to the Big Lake

Summer Fun & Games A jug of wine, a jigsaw puzzle and thou. How different that familiar phrase – “a...

Learning to See & Surprise Yourself

New Ways to View the Shore by Konnie LeMay Savvy photographers know that a camera can be your passport to...