The following submitted by Kara Schmidt to Explore Superior on May 17th, 2017

Kara Schmidt has announced that she will be pursuing the vacant seat for Superior City Council’s District 6 following the decision by Council to fill the seat via application and appointment.

“In early April, the citizens in the 6th District elected a platform that promised to work on affordable housing, smart yet restrained spending, and support for workers rights. They deserve a representative who will uphold those progressive ideals and support Mayor Paine in the fresh momentum created in this city. I am that person.” said Schmidt.

Schmidt brings to the table several years of governing experience, having served in UW-Superior’s student government for four years, and two years on the Douglas County Board. “I feel very comfortable with governance and specifically municipal government, which I have followed closely over the last several years.”

Schmidt has attended Superior Days for the last five years, leading a lobby team in 2017. Many of the issues brought forward in Superior Days were related to city needs and projects, including improving the 911 systems, Better City Superior, support for UWS and WITC, and support for a pilot project that would improve roads and county highways.

Additionally, she has worked with the Parks and Recreation Commission on the Superior Dog Park project. Schmidt currently serves as the chair of the Douglas County Democrats.

She states that District 6 deserves diligent and honest representation. Schmidt hopes to restore integrity and confidence in the seat, and hopes to create a strong voice for the citizens of District 6. The seat was recently vacated by Schmidt’s former fiancé, Graham Garfield, who is facing three misdemeanor charges and one felony charge related to domestic violence.

Tylor Elm has also announced his intention to apply to fill this seat. He lost the election for the 6th district seat on April 4th to Garfield by a vote of 141-140. Garfield subsequently resigned his seat on the city council after being charged with domestic violence. ES will publish an official announcement message from Elm in coming days. 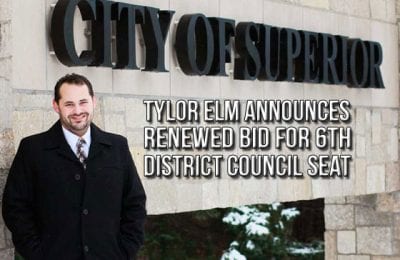