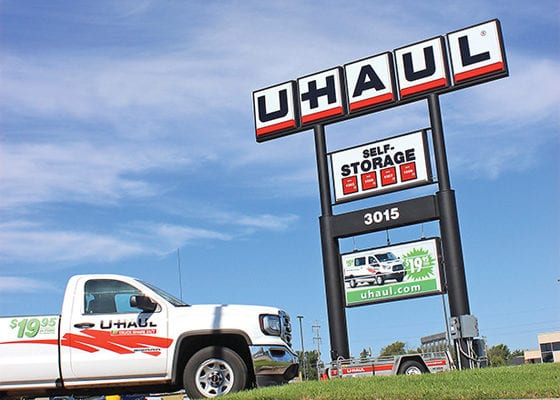 It’s truly a time of transition for the Twin Ports. Yes, a lot of construction projects have already started to change the area’s landscape. Conversely, a number of business closings have also occurred, many of them spurred by consumers’ desires to shop online instead of at physical, bricks-and-mortar locations.

This change would have been hard to imagine 30, 20 or even 10 years ago. With the recent closings of some major retail locations all across the U.S., including Kmart, Younkers, Target and Sears stores, we have yet to learn how these losses will affect communities (and in a larger sense, the country) long-term.

But a recent business development in Superior has made the loss of one of these nationwide retailers sting a bit less. U-Haul, the well-known American moving and storage chain, is now operating in the former Kmart location at 3015 Tower Ave. It has taken an empty storefront that was a reminder of what once was and transformed it into a burgeoning new business – U-Haul Moving & Storage of Superior – that serves a wide range of customers in myriad ways. More than 700 storage units, climate-controlled rooms, 24/7 access and high-tech security, a showroom, shipping options and virtually every kind of truck and trailer one would need – it’s all there.

The former Kmart building’s metamorphosis is actually part of U-Haul’s nationwide business plan. In concert with the company’s commitment to sustainable business practices, it is repurposing vacated spaces, rather than building new ones from the ground up. And former Kmart locations, as it turns out, are buildings for which U-Haul is always on the lookout.

“It’s a lot more convenient for people to be served right there in their own community.” – James Hall – General Manager, Superior

It’s been a big development for the city, and for the individuals and businesses finding that the new Superior U-Haul’s services and products are just what they needed. For General Manager James Hall, who also served as project manager of the Superior facility’s renovation, it’s an exciting time to be in his line of work.

“I actually started with U-Haul when I was 18 years old,” he said, “so I’ve been with the company for 15 years now. I basically started as a customer service representative in the Minneapolis area.” Hall eventually landed in the Northland, where he… (read more)

A Holiday Pop-Up Market Great Space Superior, a holiday pop-up market is coming to downtown Superior this holiday season. This...