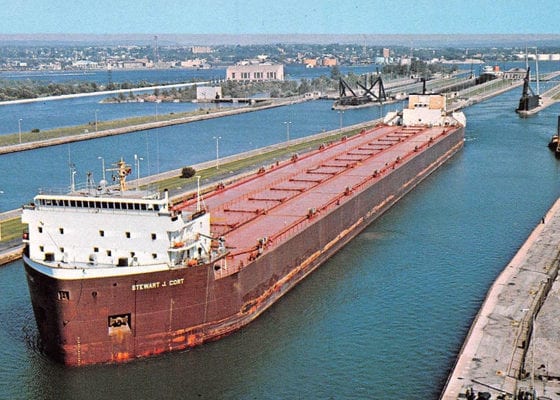 The first vessel of the 2019 maritime shipping season passed through the Soo Locks this morning at 12:01 a.m. – the official opener for the interlakes shipping season into and out of Lake Superior.

Interlake Steamship Co.’s 1,000-footer, the Stewart J. Cort, was first through the locks and the president, vice president and secretary of the Soo Locks Visitor Center Association were there to greet Captain Sipper and the crew with “first ship” caps. The Cort headed the line in 2017, too.

Last year, American Century was first through, according to the U.S. Army Corps of Engineers Detroit District.

In 1972, the Stewart J. Cort had another first – the first 1,000-foot vessel to enter service on the Great Lakes, hauling for Bethlehem Steel Corporation. As of now, the Cortwas already near Whitefish Point, according to MarineTraffic.com. March 25 is the official opening day – good lord and good ice willing – of the Soo Locks each year.