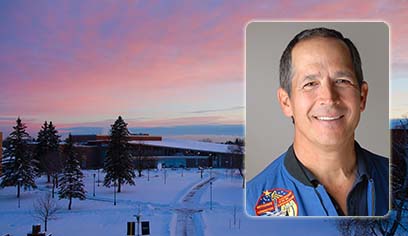 John B. Herrington to Appear at UWS

The University of Wisconsin-Superior Distinguished Diversity Lecture and Art Series will present John B. Herrington, the first member of a federally recognized tribe (Chickasaw) to travel to space. This free community event will take place Tuesday, March 26, at 6 p.m. in the Yellowjacket Union Great Room.

Like many children in the 1960s, he dreamed of becoming an astronaut. Although Herrington held tight to his goal of flying in space, his path was far from what one might expect. Lacking motivation as a college freshman, his interest in rock climbing captured his imagination and academic focus. He was subsequently suspended with a 1.72 GPA.

Finding work as a member of a survey crew in the mountains of Colorado exposed him to the practical application of real world mathematics. Herrington found the passion for learning that had eluded him, returned to college and graduated with an engineering degree. He joined the Navy after being encouraged to enlist by a retired Navy veteran, which led to a 22-year career as a Naval Aviator, test pilot, and astronaut.

Herrington’s historic mission to the International Space Station was the culmination of years of experience and training with men and women with diverse cultural and technical backgrounds, and provided him with a unique perspective that he enjoys sharing with audiences worldwide.

Dr. John “Little Bird” Anderson SUPERIOR, Wis. – To celebrate the 125th anniversary of the founding of the University of...