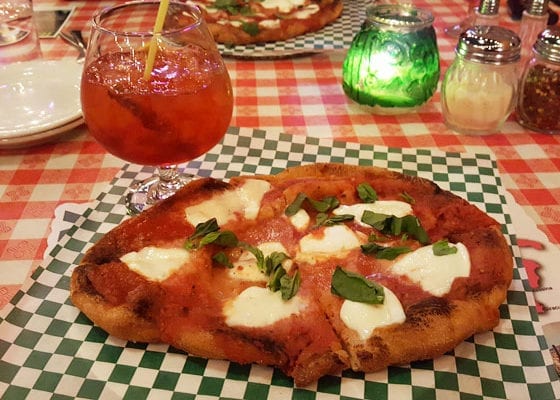 Sclavi’s Italian Restaurant & Bar (1106 Tower Avenue) and Spirit Room (1323 Broadway Street) are collaborating from now through the end of March in a “Throwback Thursday” promotion.

The dining room at Sclavi’s

Each Thursday evening for the next six weeks, these locally owned and operated establishments are working together to “make Thursday Nights a thing in Superior.”

They’ve invited current and new customers to start at Sclavi’s where they will enjoy an appetizer and a drink, and then move on to the Spirit Room for dessert and a cocktail. The price: Only $20 per person, plus tax and gratuity.

My mate and I gave it a go last week and are happy to encourage you to try it today or on an upcoming Thursday evening.

We arrived at Sclavi’s at around 7 p.m. and asked about the promotion. Our server was very enthusiastic and happily showed us to a comfortable booth.

We shared with us that the featured appetizer that evening was a Margarita Pizza and that it was served with their “Specialty Cocktail”. Not really knowing what to expect we said bring it on!

Our drinks arrived in large snifters filled with ice and a mixture of bourbon, Campari, Sweet Vermouth, Moscato wine, and their home-made cinnamon syrup. They were garnished with a cinnamon stick and an orange wedge. The drinks packed a punch and while I thought my spouse wouldn’t like the drink due to its strength, she surprised me and smiled upon tasting it. She pronounced it delicious and we toasted our good fortune.

While savoring our drinks we admired the artwork hanging from the walls of Sclavi’s which consisted of a number of beautifully done mosaics, one of which is shown here. The artwork must be a temporary show as there were price tags next to most of the items. If you’d like to see them don’t delay as I’m confident the artwork will be rotated someday soon.

Shortly thereafter, our pizzas were delivered (I was surprised that we received two pizzas as I had anticipated just one to share.) The crusts were crispy, the sauce tangy, and the fresh mozzarella delicious. Full disclosure, I would never order a pizza sans pepperoni under normal circumstances, but I found Sclavi’s pizza truly delicious and a definite “do-again.”

After eating our pizzas and draining our snifters of spirits, we paid our bill and were presented with two certificates to take with us to the Spirit Room for the remainder of our evening. With thanks to our server we trundled out to our car and commenced the short drive to our next destination…just a six block and one minute drive later we were there!

As we approached the building we admired the ice sculpture of a penguin offering up a martini at the entrance. A reminder of the recent winter Ice Festival presented by the City, the little fellow put a smile on our faces as we climbed the stairs.

Upon walking through the door we were greeted by a friendly and smiling young fellow who quickly brought us two glasses of water as he inquired what else he could bring us. When I handed him the certificates I had received at Sclavi’s he quickly went to the bar and returned with two glasses of Bailey’s Irish Cream Strawberry liqueur garnished with freshly sliced strawberries.

As we sipped these tasty dessert drinks and enjoyed the vocal styling of guitarist Nick Whelan, our server returned with two small dishes of chocolate truffles. We found the truffles to be very rich, dense and tasty. Although there were just three small truffles in each serving, they were very filling and the perfect finish to our pizza appetizers at Sclavi’s.

One reminder for you should you try this promotion. Since I had paid our bill at Sclavi’s and were not presented with a bill at the Spirit Room because of the certificates, it is up to the customer to remember to tip the server at the Spirit Room. Please don’t forget to generously reward your second server of the evening.

All in all, “Throwback Thursday” in Superior was a pleasant, flavorful, and enjoyable evening. It was fun to go to two different places, rather than the usual “one and done.”

The partnership between these two businesses speaks well to the innovative thinking that some small businesses are doing in Superior.  I encourage you to acknowledge that by spending your entertainment dollars locally whenever possible.

Theatre Fiasko Brings "The Reading Room" to Superior In a play by Ann Tuomi, the Finhish National Theater Company presents...