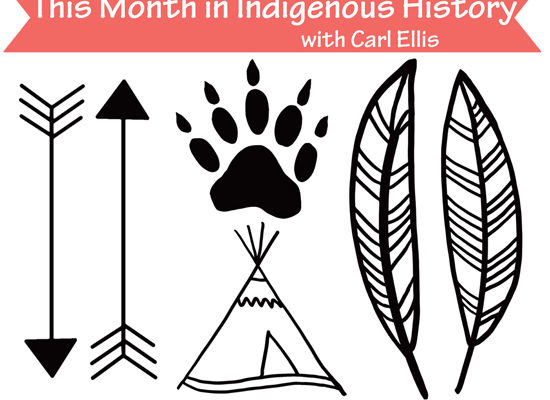 February 5, 1802: Penobscot Chief Orono dies at the age of 108. During his lifetime, he converted to Catholicism, fought in the French and Indian wars against British settlements in New England, and fought on the American side of the Revolutionary War.

February 6, 1854: Texas passes a law allowing the United States to pick two sites for Indian reservations on the Brazos River.

February 8, 1809: Russians who built a blockhouse on the Olympic Peninsula in Washington are taken captive by Hoh Indians and held as slaves.

February 9, 2012: The Oglala Sioux Tribe of South Dakota sues some of the world’s largest beer makers for $500 million, claiming they knowingly contributed to alcohol-related problems on the Pine Ridge Reservation.

February 10, 1763: Britain, Spain, and France sign the Treaty of Paris ending the Seven Years War, a.k.a. the French-Indian War. England claims sovereignty over all Indians east of the Mississippi River. France cedes Canada to England, giving up all territories in the New World except New Orleans and a few scattered islands including St. Pierre and Miquelon off the coast of Newfoundland.

February 11, 1861: In Arizona, Lieutenant George Bascom discovers the bodies of six hostages held by Cochise. After the bodies are buried, three of Cochise’s relatives and three Apache prisoners are hanged over the graves of the white hostages.

February 13, 1879: Twenty-two Warm Springs Apache Indians, surrender to Lieutenant Charles Merritt of the Ninth Cavalry at Ojo Caliente, New Mexico. The Apaches lived in Mexico for years, eluding the Army’s attempts to forcibly remove them to the San Carlos Reservation.

February 14, 1969: The Confederated Salish and Kootenai Tribe of the Flathead Reservation enact a resolution prohibiting the hunting or killing of mountain sheep.

February 15, 1749: Colonists at Lancaster, Pennsylvania, and in Virginia form a treaty with the Iroquois and Ohio tribes, making English influence paramount in the west.

February 16, 1911: President Howard Taft issues executive orders allowing the sale, use, and manufacture of alcoholic beverages on former Indian reservations that have been ceded to the United States, including the Lake Superior Chippewa, Pillager, Red Lake, Pembina, and the Lake Traverse Sioux. Taft also orders that Pillager Chippewa lands in Minnesota will no longer be…

Continue to read this article on Zenith City News.

One of the focal points of a community is its library. Superior’s is centrally located, on beautiful grounds, with a...

Picture Perfect You just never know what will capture the spirit, the beauty and the fabulous fun of our region....