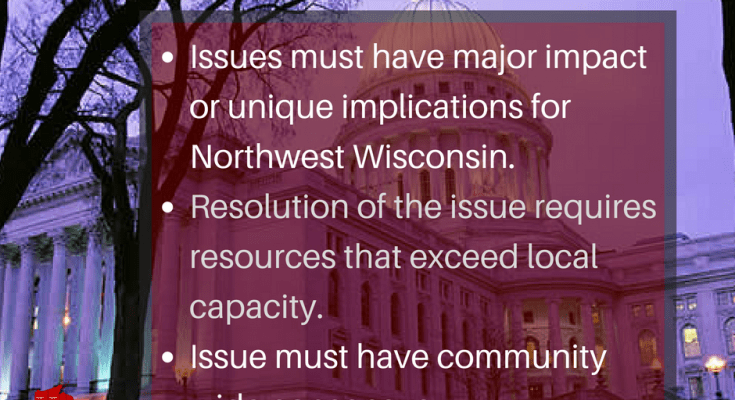 The 33rd Superior Days is scheduled for February 20 and 21, 2018 in Madison. In preparation the co-chairs Mayor Jim Paine and County Board Chair Mark Liebaert invite citizens from Northwest Wisconsin to attend the issues identification meeting. This session will be held Wednesday, October 25, 5 – 8PM and will be held at WITC-Superior in the WITC Conference Center. Facilitated discussions to identify potential legislative and agency issues will be conducted.

Superior Days was started in 1985 as the first community or county based citizens grassroots lobbying event in the State of Wisconsin. Since then thousands of citizens from Northwest Wisconsin have traveled annually to Madison to share the needs and concerns of Northwest Wisconsin with elected officials and agency leaders.

32nd Superior Days in February 2017 found success with seeking new funding for a next generation 911 system in Wisconsin. “The current state budget includes $6.7 million in E-911 funding that we lobbied for during Superior Days. This is a huge win for us and all E-911 centers statewide. Our efforts were received well and had a substantial impact on the inclusion of the funding in the state budget,” according to Keith Kesler, Emergency Management Coordinator for Douglas County.

Citizens are welcome to bring any issue to the table for discussion. Historically Superior Days issues need to meet a three-part test: (1) Issues must have major impact or unique implications for Northwest Wisconsin, (2) Resolution of the issue requires resources that exceed local capacity, and (3) Issue must have community wide consensus. This event is hosted by the Superior Days planning committee, a light meal will be served, and there is no cost to participate. Questions may be directed to James Anderson, Superior Days Coordinator with UW-Extension at (715) 395-1363.