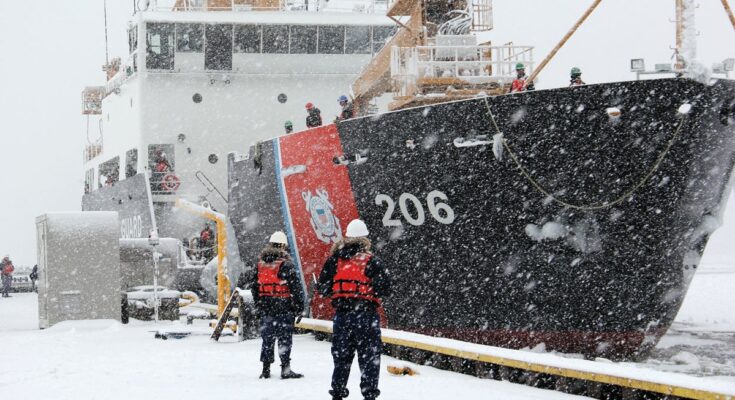 Homecoming: After almost three months away from their families, the crew of the U.S. Coast Guard cutter Spar (WLB-206) arrived in Duluth around 9:30 a.m. Wednesday (March 30) during substantial wet snowfall to welcoming signs and a host of media coverage. The 225-foot Juniper class buoy tender itself was “coming home” for the first time. After service in Alaska and a 1-year hiatus in Baltimore for maintenance, upgrades and repairs, it is now assigned to Duluth. It already did some ice breaking on its two-week journey up from Baltimore, through the St. Lawrence Seaway system and the Soo

Locks and across Lake Superior. “For us to get through Whitefish Bay, we needed to get the other vessels through Whitefish Bay,” Lt. Cmdr. Joel Wright said of exiting the Soo Locks. There were at least a half dozen other vessels breaking through the ice there, some also on their way to Duluth. Wright said it’s appropriate this Spar, once stationed in Alaska, is now home in Duluth were the first Spar, a 180-foot sea-going buoy tender, was built during World War II. Today’s Spar, launched in 2000, was built in Marinette, Wis., Marine Corporation like the USCG cutter Alder that it replaced. The crew of the Alder became the crew of the Spar after delivering the Alder last July. They returned to Baltimore in January to become familiar with the Spar and were there until March 10 when the journey to Duluth began. Find more images and information about the Spar, past and present and its homecoming on our website. The Coast Guard also posted this grand video of the Spar entering under the Aerial Lift Bridge. Sweet work!

First Arrivals: The ports of Duluth-Superior and Thunder Bay welcomed their first arriving Great Lakes vessels on Wednesday in the new navigation season. The Great Lakes Fleet’s Arthur M. Anderson (in this photo by David Schauer), the freighter famed for its brave search for the Edmund Fitzgerald during the 1975 storm, came into the Duluth Ship Canal at about noon CT as the first vessel into the ports for the season, arriving from Detroit. It’s sporting a special decal (in photo) commemorating its 70 years of service. Steve Sola, owner of the South Pier Range Light near the Aerial Lift Bridge, took this video of the Anderson’s  arrival, including the two-blast salute. In Ontario, Thunder Bay welcomed two lakers that

One More Day: One minute after midnight on Friday, the U.S. Army Corps of Engineers will open the Poe Lock...