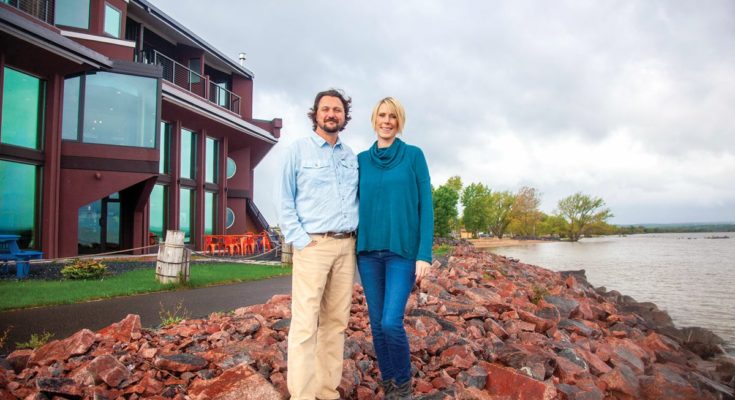 When taking a spin around the Lake to check in with longtime businesses that have changed ownership this past year or so, a common thread emerges: The more things change, the more they stay the same. Rather than a large Company XYZ taking over and resting on reputational laurels from decades of the past owners’ work, the trend is toward individual generational ownership, either within families or among younger people. And they all seem keen on holding onto traditions, while keeping an eye on how to keep customers coming back for more.

Blue Wave Inn – It took a year or so for things to shake out, but Katie Gellatly now thinks the Blue Wave Inn with its restaurant and retail space in Ashland is finally realizing its original vision.

“We’re back to an awesome Lake experience,” Katie says. She and her husband, Dave, took over the entire operation of Blue Wave this year.

Jim and Beth Hagstrom donated the complex to Northland College in 2016, something it was willing to take on to continue a “vision of a space where the public can eat, sleep, recreate, meet and just sit and enjoy Lake Superior.”

The Gellatlys continued to operate Solstice Outdoors while the inn and restaurant went to a more boutique and farm-to-table route. Today, Katie says, its back to the basics.

After putting $40,000 into remodeling the restaurant, it was renamed the Sandbar in May and offers what Katie calls “common food done uncommonly well.”

“The restaurant business isn’t easy,” she says, and a move back to more approachable menu items was their choice to encourage repeat customers.

It makes sense that a one-stop place with multiple ways to enjoy the Lake fall under one management team, she adds.

The origin of the distinct building came when Jim Hagstrom, a molecular biologist and inventor, wanted to add vibrancy to his oft-revisited hometown. In 2012, Jim and Beth purchased a property at Maslowski Beach and, with their son, Brian, as architect, created the nautical looking complex then known as Blue Wave on the Bay.

It opened in 2015 with Beth managing the three enterprises before turning them over in late 2016. The multi-use building

Previous Post2019 Shipping Season Opens Next PostRural Idyllic: Some of the Best Marriages May Be Born in a Barn

Rural Idyllic: Some of the Best Marriages May Be Born in a Barn

Jill and Kirk Clemmer are a dangerous match. She has exquisite taste and big ideas. He has a hammer and...

It’s Lent, the official season to dine on fried fish and chips with a side of slaw, which leads us...