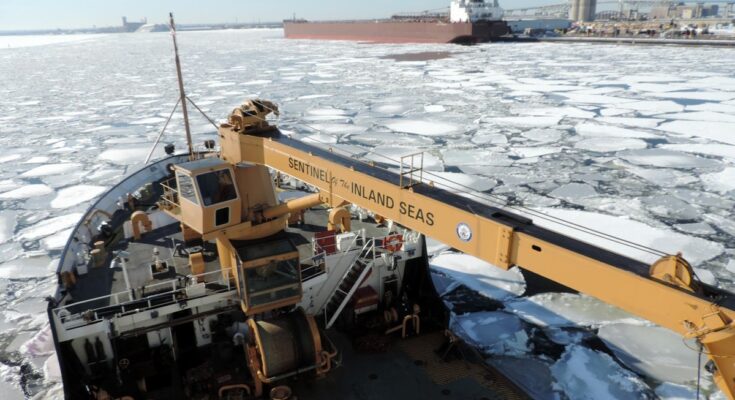 Our Own Signs of Spring: Washington, D.C., has its cherry blossoms, but the Lake Superior region has plenty of signs that winter will leave … eventually. In the Twin Ports and by the Soo Locks, we’ve seen the recent spring migration of ice-breaking U.S. Coast Guard vessels to our ports (including the Hollyhock  (seen here), which took resident media folk out on the harbor last Friday). The Canada geese have already begun arriving, though they seem to be waddling on ice as much as swimming in open waters. Also spotted on the ice recently, a coyote in Duluth and deer strolling near a freighter in Thunder Bay. And, best of all, we have those spring storms with heavy, wet snow like the one on Wednesday. Much of the region had a mix of wet snow and/or rain, but in Thunder Bay, the storm caused some issue. Power outages caused the back-up generators to kick in at Thunder Bay Regional Health Sciences Centre and triggered the closure of Lakehead University. Local schools were let out early as road conditions deteriorated. Some parts of Minnesota’s North Shore recorded 13 inches of new snow. Today on the South Shore, a winter storm warning continues with the potential of wet snowfall accumulating at half an inch per hour in higher elevations of the Keweenaw Peninsula and Huron Mountains, says the National Weather Service. This NWS graphic shows snow (appropriately in white) coming in behind the “mixed precipitation” (in purple). The Madeline Island Ferry has had to suspend service because of ice conditions and the windsled also has no passenger service today because, as the phone message notes, “it’s too sticky out there and ice conditions are not good. I’m not sure I can get you back if I take you over.” You can check out the island conditions for yourself on the Madeline Island Chamber link to the webcam atop the Beach Club

Water Check: Lake Superior water levels ended up near “normal” at the end of March, the International Lake Superior Board of Control and the U.S. Army Corps of Engineers reports. The water levels declined 0.4 inches in March, which is average for that month. That puts the Big Lake closer than it’s been for awhile near its century long average. At the beginning of April, it is 3.5 inches below the long-term average water level (1918-2021), but nearly a

This article from LakeSuperiorCaribou.ca is about the conservation and restoration of the Lake Superior caribou.  These caribou are one of...

Homecoming: After almost three months away from their families, the crew of the U.S. Coast Guard cutter Spar (WLB-206) arrived...