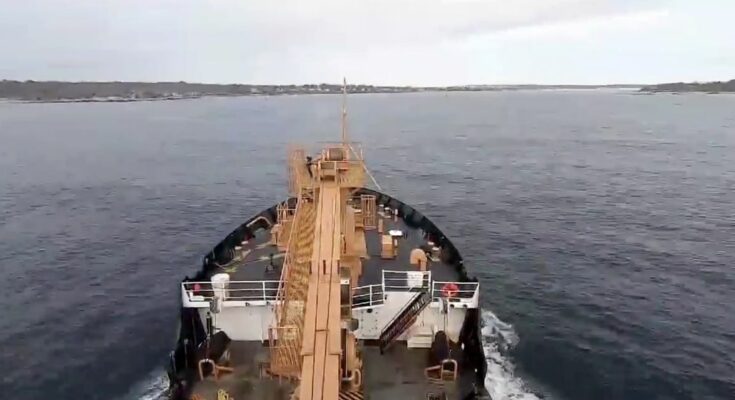 Light Speed: The U.S. Coast Guard cutter Spar, newly assigned to Duluth, is working its way toward the St. Lawrence Seaway system … and if the speed on this timelapse video sailing to Portland, Maine, is any indication, the crew is anxious to return to Duluth. You can follow the progress on the US Coast Guard Cutter Spar Facebook page. Meanwhile … the opening of the Soo Locks is only a week and a day away. The U.S. Army Corps of Engineers crews are wrapping up the winter work and have started the debris removing process, according to the Detroit District Facebook page, where this photo was posted. “Every year, once the locks are empty, crews at the #SooLocks start cleaning the drainage system below the lock floors. This year the drain crew, also called the “mucking crew”, concentrated on the lower ends of the Poe and MacArthur Locks removing approximately 50 cubic yards of debris.”

New Border Rules: Canadian news outlets are reporting this week that the Canadian government plans to eliminate the requirement for COVID testing just prior to entering or exiting the country by the end of this month. Random tests, however, will be used to track emergence of any new COVID variants, reports Ashley Burke of CBC News. “That testing requirement will be dropped by April 1 for fully vaccinated travelers,” Ashley quoted sources.

Water Users: More than 50 million gallons of water daily are taken from Lake Superior by permitted users between Two Harbors and Grand Marais, Minn. Joe Friedrichs of WTIP found in a story that recently aired. “Cities from Duluth to Grand Marais use the lake to supply homes and businesses drinking water. Mining operations on the North Shore use an abundance of Lake Superior water to process materials that arrive from the Iron Range. Similarly, Lutsen Mountains, the ski resort on the North Shore, pulls water from the lake to make snow when it needs to. On average, Minnesota residents or businesses take more than 213 million gallons of water from Lake Superior on any given day. For comparison, that would be enough to fill more than 300 Olympic sized swimming pools every day. This number of 213 million gallons includes Duluth, both the city’s water supply and businesses that take water from the lake. As the largest Minnesota city on the shores of Lake Superior, Duluth uses

Transitions: There have been notable comings and goings and up-for-sales recently. The only remaining fleet based on Lake Superior –...