Home Community Why Downtown is the Best Place to Develop 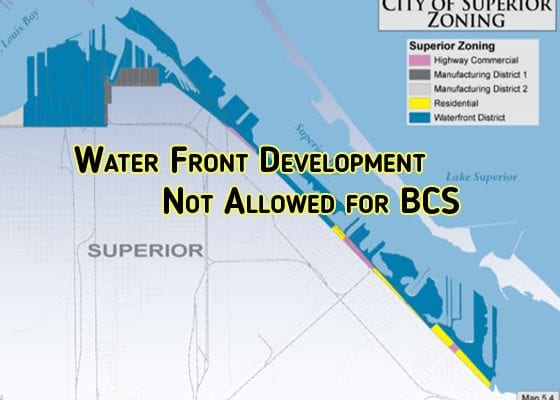 Why Downtown is the Best Place to Develop

BCS Is Getting Closer to Becoming a Reality

Explore Superior has been covering the ongoing efforts of local leaders to bring a large development to our downtown area. The Better City Superior group of concerned business and government leaders first gained the consent of  local residents by a 3 to 1 margin to move forward in pursuit of permission to form an Exposition District in Superior.

Now the drive is to get the seal of approval from State government in order to impose a ½% sales tax on prepared food and beverage sales, along with a 2¾% sales tax on hotel/motel stays. During the recent “Superior Days” at the state Capitol, local promoters were successful in getting Sen. Tom Tiffany, a Republican legislator, to come out four-square behind Better City Superior.

Superior is getting closer to successfully gaining the right to improve its downtown through development thanks to leaders like Senator Tiffany.

Making a Case for Downtown

Proponents of BCS believe that our downtown is poised for development, having just undergone a massive street improvement project from the North End to Belknap Street. Additionally, there are numerous vacant lots, and empty buildings in that district that are prime candidates for inclusion in a development of this nature.

What About the Water Front?

There are some who, while in favor of development, question why downtown. Why not go to the shoreline like has been done in Duluth? Rather than try to re-enliven a dying downtown, they would rather develop our shorelines in hopes of attracting the same type of tourism that is seen in Duluth.

The fly in the ointment is a document known as the Wisconsin Constitution. According to the Wisconsin Department of Natural Resources, our lakes and rivers are public resources, owned in common by all Wisconsin citizens under the state’s Public Trust Doctrine.

Further defined by lawsuits and statues, the Public Trust Doctrine declares all navigable water to be “common highways and forever free” that are held in trust by the DNR.

The logic behind this doctrine is that it is the government’s obligation to assure public rights to waters. These rights include not only rights of transportation on navigable waters, but also protection of water quality and quantity, recreational activities, and scenic beauty. The Public Trust Doctrine holds that certain natural resources like navigable waters are preserved in perpetuity for public use and enjoyment.

Wisconsin law recognizes that owners of lands bordering lakes and rivers – “riparian” owners – hold rights in the water next to their property. These riparian rights include the use of the shoreline, reasonable use of the water, and a right to access the water. However, the Wisconsin State Supreme Court has ruled that when conflicts occur between the rights of riparian owners and public rights, the public’s rights are primary and the riparian owner’s secondary.

In a nutshell, this is the crux of the problem when it comes to consideration of redeveloping any waterfront area in Wisconsin. Some would say it’s not a problem, but a protection. By constitution, the State of Wisconsin limits the development of state lake shores that have been created as filled land to only public access or industrial uses. No private commercial use is allowed. To make matters more convoluted, what constitutes “filled land” is sometimes defined by maps that date back to the 1890’s.

Presently, the shorelines of Superior abutting the bay are almost entirely zoned industrial, and are thus unable to be used for any other form of commercial use.  The following table address acceptable uses of water front properties in Superior. It was taken from the Duluth-Superior Port Land Use Plan, as published by Metropolitan Interstate Council in December of 2016.

According to a study by the Metropolitan Interstate Committee, it appears that only three zoning districts are present ly allowed along the Superior waterfront (other than some very small slivers of other districts): Waterfront-1 (W-1), Manufacturing-1 (M-1), and Manufacturing-2 (M-2).

The W-1 dominates the Superior waterfront (shown in blue in the map below.) Permitted uses include water dependent land uses and also any use permitted in the M-2 heavy manufacturing district with planning commission approval.

This table demonstrates what Superior can and cannot do along its waterfront under current law.

While there have been some actions taken by members of the state assembly to modify the above restrictions, the possible success of these moves is unknown at this time. Even if the guidelines for use of our water front in Superior is changed to permit development of the nature seen in Duluth, it will be a long process.

On the short-term, Superior is much better served by pushing to redevelop and improve our downtown area. This is a doable plan that will make Superior a better place to live. It also will become a reality much sooner than waiting for waterfront development that may never become legal and viable under state law.

Citizens interested in supporting a change to these riparian limitations by virtue of the Public Trust Doctrine are encouraged to express their views to our state representatives and Senator Tom Tiffany (R-Hazelhurst), District 12, at   (608) 266-2509 | Sen.Tiffany@legis.wi.gov).

If it can ever change it will be by the will of the people. For more information about Better City Superior, scroll down to the bottom of this screen for a directory of articles published by Explore Superior over the past year or so.

Here is historical background on riparian rights from the Wisconsin DNR…

Other articles from Explore Superior about Better City

One thought on “Why Downtown is the Best Place to Develop”

Property Owners Control Their Own Destiny Here on Explore Superior, we've shared quite a bit of information about the Better...

The Future of Superior

Who Is In Control? The past year has been an exciting time in Superior. Most of us first heard about...