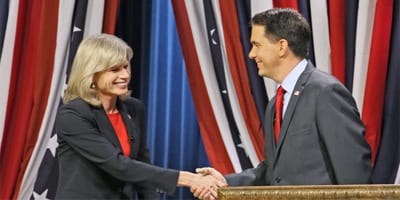 Mary Burke and Scott Walker participated in one last debate of the issues on October 17th. A detailed analysis of that debate can be found on PolitiFact Wisconsin by clicking HERE. I’ll try to summarize that article, but please view the entire article so you can better understand the issues. According to PolitiFact, there was plenty of falsehoods presented on both sides of the table. After reading this summary, I encourage you to scroll down and review stated views on specific issues by both Burke and Walker.

Burke claims that Walker’s policies has caused the real income of a “typical Wisconsin family” to drop by nearly $3000 in the last four years. PolitiFact rates that statement as Mostly False. While median household income in Wisconsin has fallen $2743 in four years, most of that drop occurred before Walker took office in 2011.

She also stated that Wisconsin is “dead last” in the Midwest on job creation, a claim that PolitiFact rates as False. While the quarterly jobs data for March 2011 to March 2014 does reflect that statistic, that period does not correspond to Walker’s term. In the past year, Wisconsin jobs data has moved ahead of two other midwestern states.

Walker blamed former governor, Jim Doyle for tax and spending hikes that are “largely responsible” for the state’s 133,000 drop in private sector jobs between 2006 and 2010. PolitiFact rates that claim as Mostly False, noting that the state and national economy was in the worst downturn in decades. In actuality, Wisconsin fared somewhat better during that period of time than the rest of the country.

Sometimes, it’s all a matter of how statistics are presented. Burke touted that unemployment in Wisconsin was as low as 4.8% when she ran the Wisconsin Commerce Department under Gov. Doyle…this is a true statement. However, Walker was also right when he stated that the only time in the last 25 years that Wisconsin’s unemployment rate exceeded the U.S. average was when Burke was in her Commerce job.

I encourage you to follow this LINK and read the entire article regarding this debate. It is very interesting, and illuminates the old saw that figures don’t lie, but liars figure!  These are especially important numbers, since the state’s nonpartisan fiscal bureau has said that Wisconsin faces what is commonly known as a budget shortfall, or “structural” deficit of $1.8 billion for the next budget period, 2015-2017. If there are no changes in revenue or spending (or both), the next biennial budget will be out of balance.

The state constitution forbids a deficit, so the next governor will have to devise a solution that corrects the imbalance between ongoing revenues and spending. This is not a unique situation however. In January of 2011, when Walker took office, he faced a $2.5 billion “out-year commmitment” or shortfall, as well as an increase in funding requests from state agencies of approximately $1.1 billion. This ammounted to a $3.6 billion “deficit.” Walker addressed this emergency at the time through funding cuts and by passing the Act 10 collective bargaining law.  Nobody said the job of being governor would be easy…regardless of which of these candidates gets elected, they have their work cut out for them.

What follows is an attempt at clarifying the differences in political and philosophical views of Wisconsin Democratic Governor candidate Mary Burke, and those of incumbent Republican candidate Scott Walker. Sources for this information Vote Smart, the Huffington Post, and the Campus Election Engagement Project, which relied on OnTheIssues.org, BallotPedia, PolitiFact, FactCheck, and Vote411 (funded by the League of Women Voters Education Fund).  We are trying to stick solely to campaign stances, and hope that this will allay the concerns of those who are predisposed to find bias in reports such as this.

The first table lists policy positions, and the second table displays some of the endorsements or favorable scores each candidate has received from various organizations. Each organization is linked to a web page that summarizes their stances on issues, and has links to their web pages. This is by no means a complete dissection of their views and track records, but hopefully our readers will walk away with a slightly better understanding of where each of these candidates stand on key issues.