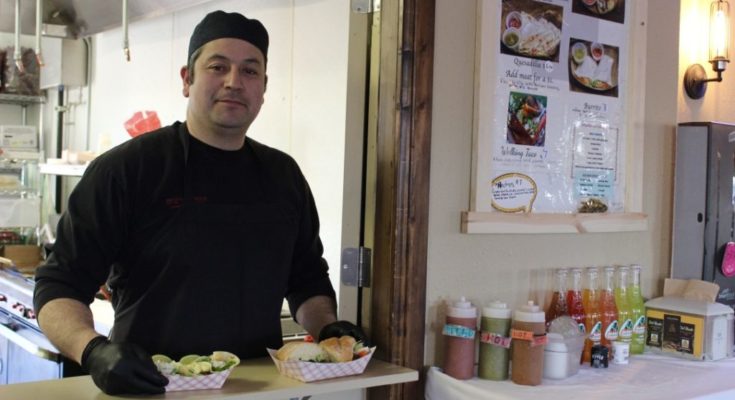 The mobile and seasonal business has been a regular at area festivals and events like Food Truck Fridays outside the Duluth Public Library for four years. But owner Eduardo Sandoval has been on the lookout for a brick-and-mortar location to bring his business to the next level.

Sandoval learned from a friend that Mike Lemon was looking for someone to serve food from the kitchen at Average Joe’s. Lemon, who also owns Rex Bar at Fitger’s in Duluth, opened the bar in December in the former High Fives on Fifth location at 1310 N. Fifth St. in Superior just across the Blatnik Bridge.

It’s a mutually beneficial agreement. Now Lemon’s bar patrons can order up a side of tacos with their beer, and Sandoval has use of a commercial kitchen both for bar service and to prep food for his ongoing pop-up and food-truck gigs.

Sandoval is in the process of rebranding his business to “Taqueria El Oasis Del Norte.” Though he serves a number of dishes, the main emphasis is on what he calls “real tacos.”

While Sandoval is careful not to criticize Americanized tacos, he notes there’s a distinction between the type of taco most people here are accustomed to and the type he grew up with in Mexico.

He started the business, in part, because he was craving the flavors of his homeland. Authentic Mexican tacos are “clean,” “simple” and “fresh,” he explains. The idea is to be able to taste each of the layers of flavor.

More unusual ingredients are available too, like lengua (cow tongue), which Sandoval says people compare to roast beef. The taqueria also has nopales (cactus) tacos for vegetarians. A trio of homemade salsas, both red and green, can be added as needed. Note: the “hot hot” isn’t for the meek.

Nearly everything is made from scratch at the

Previous PostAround the Circle This Week: March 22, 2019 Next PostSuperior Advances Clean Up Project

When taking a spin around the Lake to check in with longtime businesses that have changed ownership this past year...

﻿﻿﻿ In this edition of WDSE-TV‘s The Slice, Jay Austin from the University of Minnesota Duluth’s Large Lakes Observatory explains...