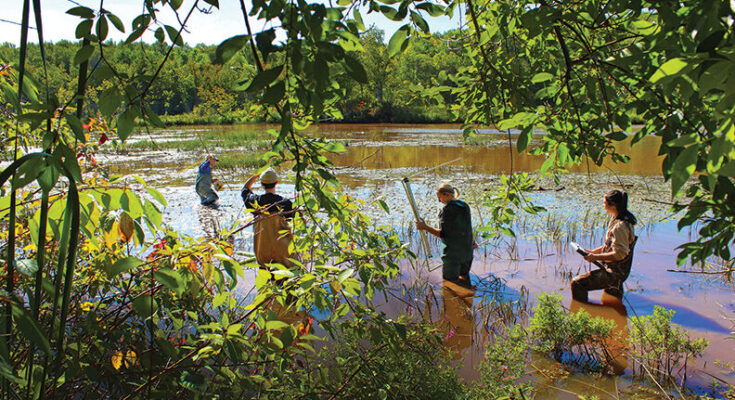 The Lake Superior National Estuarine Research Reserve, headquartered on Barker’s Island at 14 Marina Drive in Superior, celebrated its 10th anniversary in 2020 – a milestone achievement for the freshwater ecosystem located in our own backyard.

NERRS originated from the establishment of the Coastal Zone Management Act in 1972 to encourage states to “enhance public awareness and understanding of estuarine areas.” Through NERRS, community, state and federal partnerships are built to promote stewardship and management of estuarine and coastal habitats.

The Great Lakes contain more than 20 percent of the Earth’s surface freshwater, and Lake Superior, the world’s largest freshwater lake by surface area, still holds its title as the cleanest among them. The lake is is inextricably entwined with the St. Louis River, so the Research Reserve’s research and education programs are important. Monitoring and protecting water quality and coastal shorelines is vital to the health of fish and wildlife.

“It’s at the very tip-top of so much freshwater and so many international communities.”
– Reserve Interim Manager Deanna Erickson

It’s also important to local businesses and industries large and small – from commodities shipping through our port to businesses serving the tourism industry including hotels, restaurants, breweries and pubs, fishing and recreation gear shops, and boat and recreational vehicle businesses.

The Lake Superior Research Reserve’s two buildings on Barker’s Island are home to its administrative offices as well as Wisconsin Sea Grant Institute offices. They are owned by UW-Superior and are part of the university’s campus. Facilities also include a public science and interpretive learning center and classrooms, two research vessels and a dock-side laboratory.

The Research Reserve has a symbiotic relationship with UW-Superior faculty and students. Professors are conducting grant award-winning research on threats to freshwater quality, and students in its Natural Sciences Department gain learning for careers in everything from chemistry and biology to environmental science, geographic information systems and more.

The River and the Lake: Always Connected

You don’t need to be from the Twin Ports area to recognize the magnificence of the water resources that border Superior and the surrounding region. In its own right, Lake Superior overshadows everything in its vicinity. But the St. Louis River, the second largest tributary on Lake Superior, is a grand spectacle in itself.

“The strength of the Reserve is the face of our partners … not the face of our state agency or any state organization.”
– Dr. Tricia Gorby, Division of Extension – UW-Madison

Flowing southward from its headwaters east of Hoyt Lakes, Minnesota, the river’s watershed encompasses 3,634 square miles, draining mostly from woodlands and swamps and flowing peacefully until it begins a precipitous drop just past Carlton, Minnesota – plunging some 450 feet through the rocky gorge at Jay Cooke State Park. Here, after its journey of roughly 190 miles, the river broadens into… [READ MORE]

This year's St. Louis River Summit theme, "10 Years and Counting - Collaborating for Success," is meant to highlight the...

Lake Superior Was Almost an Ocean, Not Just a Sweetwater Sea. Back 1.1 billion years ago, the earth began a...