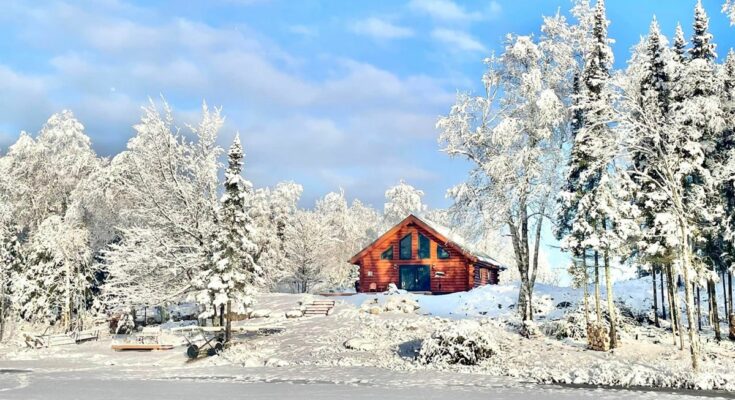 Talk about a Throwback Thursday: The phrase,  “a winter wonderland” in the Lake Superior region has two meanings, both embodied by this beautiful image from photographer Paul Pluskwik taken just this morning near Ely, Minnesota. There is the marvelous wonder of a snowy winter landscape … and the “I wonder what happened to spring?” when the weather bounces around in April. Flood alerts have been risen around the Big Lake region because of the plentiful snow and now often rains. The Goulais River in Ontario was under a flood watch, in part because potential ice jams might affect the flow of the swollen river, reports Elaine Della-Mattia of the Sault Star. Drew Peterson of SooToday had a video to share showing the massive ice movement on that river. Meanwhile, snow showers are expected to continue off and on through today and into the weekend along the Minnesota and Wisconsin shores and windy with sunshine and possible lake-effect snows in the Upper Peninsula. Along the Ontario shore today, we expect flurries both west in Thunder Bay and east in Sault Ste. Marie. That’s what we expect, but it is spring along Lake Superior so you just gotta wonder …

First Saltie: The official first saltie – the Resko – arrived under the Aerial Lift Bridge in Duluth on Wednesday (April 13) logging in at 6:32;34 p.m., as captured here by David & Gus Schauer. The winner of Visit Duluth’s First Saltie contest will be announced during a welcoming ceremony hosted Friday by the Duluth Seaway Port Authority on the ship. The Twin Ports first “saltie” is the first ocean-going vessel to make it under the bridge after traveling the entire St. Lawrence Seaway system. Steve Sola got a video of the Resko arriving through the Duluth Ship Canal with ambient radio communications. The tugs Arkansas and Missouri help it to navigate through the ice. The ship is loading spring and durum wheat at Gavilon Grain on Connor’s Point in Superior with the cargo destined for Italy. The Port of Thunder Bay, meanwhile, expects its first saltie on Monday; it also has a first saltie contest.

‘Tis the Season: Being a tourism-driven area, our local regions are gearing up with marketing campaigns for the coming visitor season. We thought we’d share the new videos and marketing tags for this year from Lake Superior’s two largest metro areas. The much anticipated rollout

Our Own Signs of Spring: Washington, D.C., has its cherry blossoms, but the Lake Superior region has plenty of signs...

This article from LakeSuperiorCaribou.ca is about the conservation and restoration of the Lake Superior caribou.  These caribou are one of...