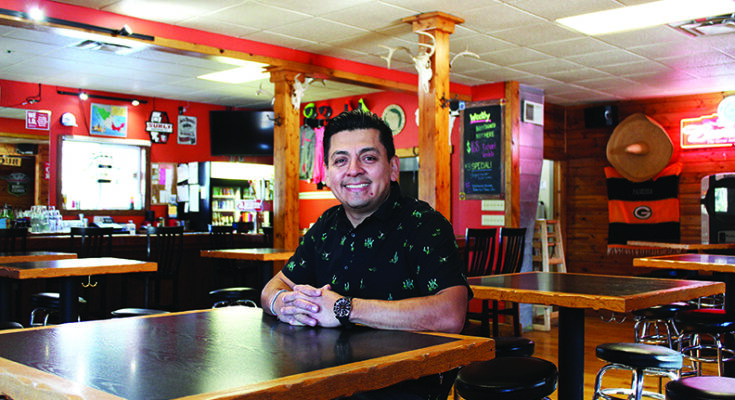 Come to the Cantina

Bucktales Cantina & Grill Has a Big Fan Base, Thanks to Its Unique Mexican and American Cuisine

Six days a week (every day but Monday), Dee Morales and his crew can be found hard at work preparing delicious food and drinks for their customers to enjoy. Morales is the owner of Bucktales Cantina & Grill, located at 6098 S. State Road 35 in the Town of Superior near Pattison State Park.

From the outside looking in, Bucktales looks like a typical county bar. There’s a horseshoe pit behind the building, where bar leagues compete for bragging rights throughout the summer months. The interior décor is eclectic, featuring a mounted deer – adorned in a festive sombrero – and a Green Bay Packers poncho, among other unique items. “I would describe our vibe as cozy Northwoods mixed with authentic Mexican flair,” said Bucktales server and bartender Kai Beamer.

With a name like “Bucktales,” one might assume this establishment is geared solely toward the deer hunting demographic. But we can’t always judge a book by its cover.

A Surprising Gem in Rural Superior

Yes, Bucktales is a county bar – or rather a cantina, as Morales prefers to describe it. But Bucktales is also a sit-down restaurant featuring made-from-scratch Mexican and American food, including burritos, quesadillas, carnitas, barbacoa, chimichangas, nachos, fish tacos, burgers, gyros and more.

Beverages include homemade Bloody Marys, margaritas and mojitos as well as craft and domestic beers, wine, a variety of seltzers and soda. There are even homemade desserts;  Bucktales’ fried cheesecake and chocolate lava cake are a huge hit with customers.

“I like to take pride in what I do. People pay good money for their food, so every time I serve people, it’s like I’m serving my family.”
– Owner Dee Morales

This establishment is family-friendly and offers a safe and welcoming restaurant vibe. “It’s so cute, quaint and quiet,” said Molly Robinson, a Bucktales server and bartender. “Bucktales is very much a restaurant over a bar.”

Bucktales offers table seating, two “buddy bars” and a bar. There are also tables outside to enjoy dining outdoors in warm weather months.

The delicious food, made even more popular due to Morales’ multiple cooking segments featured on FOX 21 News, consistently pulls in repeat customers as well as first-timers eager to try it out. “People will drive three hours just to come here and eat,” Robinson noted.

Morales, who is originally from Mexico City, definitely has an edge when it comes to preparing delicious Mexican cuisine. But his dishes also have a distinct American flair.

“I wanted to do a bit of everything,” Morales said. “Not everyone likes real Mexican food, like corn tortillas and cilantro, so I try to combine traditional Mexican dishes with American flavors, too.”

Morales had moved to the United States from Mexico in 2000, seeking… [READ MORE]