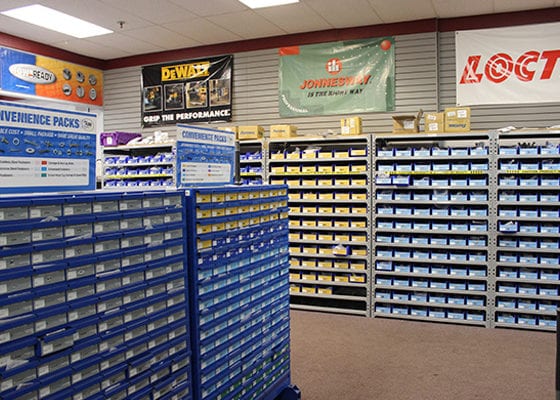 Long before this company became a publicly-traded behemoth with billions of dollars in net sales, Fastenal was just an idea bouncing around in the head of cofounder Bob Kierlin, a young man from Winona, Minn.

His big idea was to invent a vending machine that would dispense nuts and bolts, and it was this idea that helped win over investors and enabled Kierlin and four of his friends to open the first Fastenal location in 1967. But as is often the case with start-ups, plans subsequently changed, and the vending machine idea was tabled in favor of launching traditional stores with a person behind the counter.

As the years went by, Fastenal steadily grew more successful. The storefronts multiplied, as did the employees. The company went public and earned some press in the Wall Street Journal. By 1993, it was making $100 million in annual sales. And in 2008, Fastenal was finally able to begin introducing the concept that started the whole ball rolling: providing industrial vending machines, an outstanding idea that has only allowed this company to keep growing.

Today, Fastenal is North America’s largest fastener distributor. In 2012, Bloomberg Businessweek  noted it as the top-performing stock in the Russell 1000 index over a recent 25-year period. In 2015, Forbes ranked it No. 44 on its “100 Most Innovative Companies” listing, just ahead of Starbucks. In a study, the Harvard Business Review and the Reputation Institute called it one of the world’s 10 best companies in terms of the company/CEO reputation. And by 2016, it had more than 2,500 stores, had expanded to serve 21 countries and had racked up a hefty $4 billion in net sales.

“When you have a local store like Superior, you stock product specifically for [local] customers.”
– District Sales Manager Sam Puza, Fastenal

Superior’s Fastenal location is currently in the Mariner Mall (now known as the Mariner Retail Business Center), but that will change with a move later this year to the site of the former Erlanson Lumber and Millwork Co. at 310 Belknap St. While the Superior business is part of a much larger corporate structure, the staff who work there will attest to the fact that they’re also able to work with independence in serving the needs of their local customers. And they know their customers well.